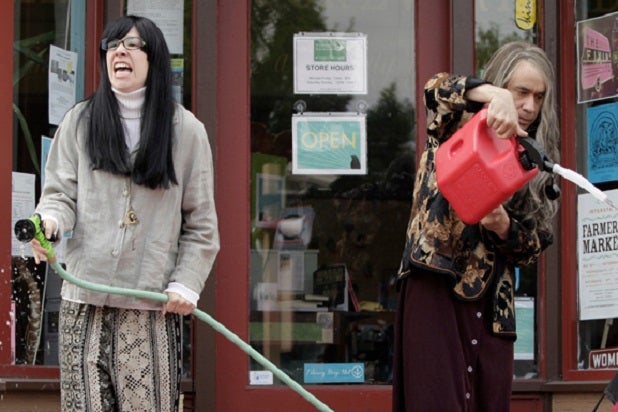 In Other Words is closing the book on “Portlandia.”

The Portland bookstore, which had served as the location for the IFC series’ “Women & Women First” segments, announced Wednesday that it had severed ties with the Fred Armisen-Carrie Brownstein comedy.

In doing so, the bookstore made some pretty nasty claims about the show’s crew and its “s—ty” sense of humor.

In a blog post titled “F— Portlandia,” the staff of In Other Words said that its decision to end its relationship with the series was “a direct response to a particular egregious filming of the show in our space which saw our store left a mess, our staff mistreated, our neighbors forced to close and lose business for a day without warning, and our repeated attempts to obtain accountability or resolution dismissed.”

But the bookstore staff also said that the decision was made in response to a series “which is in every way diametrically opposed to our politics and the vision of society we’re organizing to realize.”

“The Women and Women First segments that are filmed at In Other Words are trans-antagonistic and trans-misogynist and have only become more offensive as the show goes on. ‘LOL Fred Armisen in a wig and a dress’ is a deeply s—ty joke whose sole punchline throws trans femmes under the bus by holding up their gender presentation for mockery and ridicule,” the staff said.

The In Other Words crew also took issue with the IFC comedy’s lack of diversity.

In its online jeremiad, the In Other Words staff also lamented that the amount that the “small flat fee per episode” that the store received isn’t enough to cover the business it loses as a result of having to close for shooting.