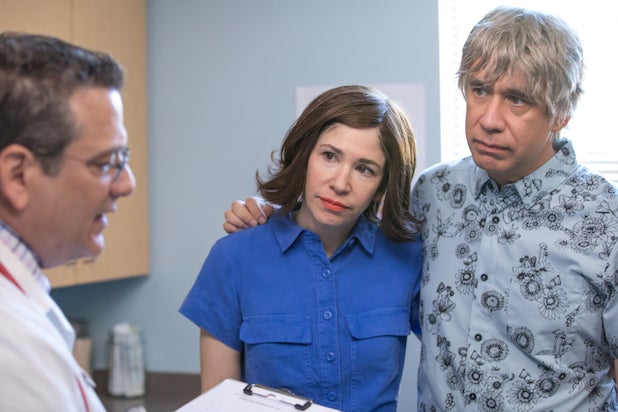 After eight seasons of filming the satirical, peculiar, and ever-enjoyable “Portlandia,” you’d think co-stars Carrie Brownstein and Fred Armisen would have dealt with every possible awkward situation on camera by now.

But then they shot the final scene for the absurdist IFC series, which Carrie Brownstein tells TheWrap was an extra weird experience.

“It was really strange, cause it was characters we had never played before, which this far along in the series was kind of rare,” Brownstein said in a recent interview ahead of the series finale. “So I don’t even remember who the characters’ names were that we were playing. We were playing people that worked in an office, so there was already that element of weirdness, that we weren’t ending on characters that were beloved to us. And I think we ended on like an insert shot.”

Also Read: 'Portlandia' Sendoff: Carrie Brownstein Tells Us What More Is in Store for Final Season

Yeah, that sounds less emotional compared to wrapping with fan-favorites like passive-aggressive feminist bookstore owners Toni and Candace. But it was actually a touching moment.

“The entire crew had started — people that work back in the production officer — had started gathering in this office,” Brownstein continued. “And so it was strange cause we were filming something so mundane and minute, but what was around us was the entire world of the show. All the people we love, all the people we work with were there. So there was this strange discrepancy between what we were filming and then the emotions around it. It was an uneventful scene, in terms of what we were shooting. But it was obviously an eventful moment.”

Brownstein also explained how she and Armisen handled crafting the finale — which admittedly wasn’t as stressful as closing the book on say “Game of Thrones.”

“I think we try to write in a way that we’re sending off some of our most beloved characters,” Brownstein said. “Someone like Kyle MacLachlan, who plays the Mayor, giving him an ending that befits his character and his personality. So hopefully people will like it. I feel like there is so much less pressure on a sketch show,” Brownstein added laughing. “We didn’t have to kill everyone off or make everyone get married. So I think there is a sense of closer, but it’s open-ended too.”

The series finale of “Portlandia” airs tonight, Thursday, at 10 p.m. on IFC.

From beet emergencies to artisanal knots, Fred Armisen and Carrie Brownstein return for Season 8 on Jan. 18

"Portlandia" never received mainstream recognition, but Fred Armisen and Carrie Brownstein are probably fine with that. The show kicks off its eighth and final season this week, and since 2011, the show has always found the perfect niche, appealing to the small subsection of music-loving, internet-dwelling, Pacific Northwest hipsters it satirizes. Picking out the show's finest moments is tough since the show's charm is in the zany rhythm of its Portland vignettes and cadre of caricatures. So while some of these are fan favorites, others are obscure, locally sourced gems that have helped keep "Portlandia" weird.
View In Gallery