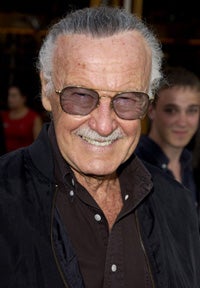 Lee — the comic icon responsible for “Spider-Man,” “The Incredible Hulk,” “X-Men” and “Iron Man” and founder of his own POW! Entertainment — is collaborating with Archie Comics and A Squared Entertainment on “Super Seven,” set for launch in the fall.

The story is centered around “seven aliens who find themselves stranded on planet Earth after their spaceship crashes, only to be befriended by none other than Lee himself,” according to the release. “Taking them under his care, Lee becomes their leader and enables them to resume their lives as superheroes on Earth.”

"Nothing is more exciting to me, as a writer, than creating a new type of story or introducing a new theme,” Lee said in announcing the series. “Although I’ve briefly appeared in other comics, [this] is the first time that I’ll actually be a continuing character in a far-out, original superhero series."

The collaboration with Archie Comics and A Squared does not fall under Lee’s pact with Walt Disney Studios, which has a first-look deal with POW!.

But Disney and POW! have “a number of projects in development,” Lee said.