Benedict Cumberbatch shows his ruthless side in the first full trailer for “The Power of the Dog,” Jane Campion’s Western for Netflix, and he does so by being needlessly cruel to a boy played by Kodi Smit-McPhee.

“The Power of the Dog” is Campion’s first film with a male protagonist and it grapples with the thorny aspects of masculinity and ego.

Cumberbatch’s character Phil Burbank is described as “brutally beguiling” and a “cowboy as raw as his hides.” Phil and his brother (Plemons) are ranchers in 1925 Montana. Phil revels in cruelly torturing a widowed proprietress (Dunst) and her son (Smit-McPhee), only for his brother to marry her. It soon leads Phil to hover and mock her and her son, only to take him under his wing in a move that may be a further act of his menace. 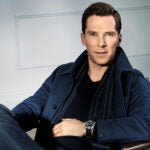 Campion adapted the film from the novel by Thomas Savage, and the film also features a score by Radiohead’s Jonny Greenwood.

Netflix will release “The Power of the Dog” first in theaters on November 17, and it will then drop on Netflix on December 1.

Check out the new trailer here and above.