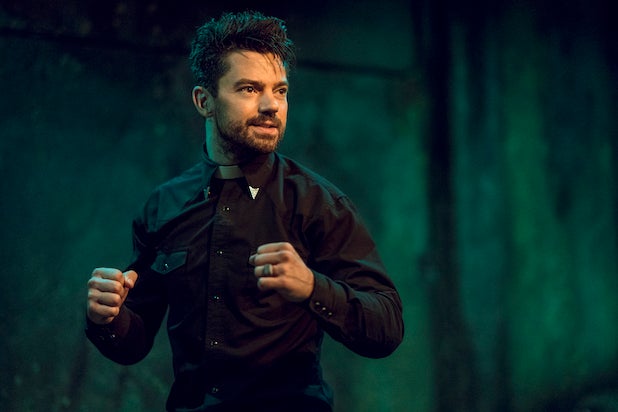 You better get ready to say goodbye to Jesse Custer, because “Preacher” is coming to an end with its upcoming fourth season on AMC.

“The fourth and final season of ‘Preacher’ is coming. It’s been a wild ride. Thank you all,” Rogen captioned a video he shared on Twitter and Instagram, which showed the drama will return for its final 10-episode run on Aug. 4.

Also Read: 'The Terror' Season 2 Gets Premiere Date From AMC - and Some Long-Awaited First-Look Photos

Based on the graphic novels by Garth Ennis and Steve Dillon, “Preacher” follows West Texas preacher Jesse Custer (Dominic Cooper), his badass ex-girlfriend Tulip (Ruth Negga), and an Irish vampire named Cassidy (Joseph Gilgun) as they embark on a road trip to find God and are thrust into a twisted battle spanning Heaven, Hell and everywhere in between.

“Preacher” is a co-production between Sony Pictures Television and AMC Studios.

“Preacher” will return with its fourth and final season Aug. 4 on AMC.

The fourth and final season of Preacher is coming. It’s been a wild ride. Thank you all.