The first is one that arises every year: who’s going to be the big winner?

The second, though, is specific to this year, and the answer may determine the future of the Spirit Awards: Is the show going to work in downtown Los Angeles at night?

The Spirit Awards, after all, are a Saturday-on-the-beach institution, with a 15-year run as the loose, fun beach party that takes place the day before the Oscars in a tent on the sand in Santa Monica. The vibe was casual; everybody dressed down; Best Actor winner Mickey Rourke could talk for six minutes without anybody telling him to stop; and folks in attendance knew they were going to get an event whose entertainment always included song parodies. 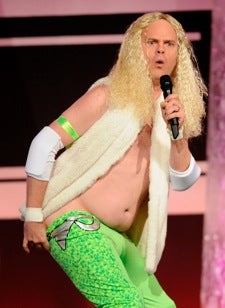 But year, though, to commemorate the 25th anniversary of the awards, things have changed. The event has moved downtown, to the events deck at the LA Live complex. The day has shifted from Saturday to Friday, and the time has moved to 8 p.m., to make it a late-night program when it airs live and uncut on IFC. Eddie Izzard hosts.

And with those changes, the vibe of the event is bound to shift; for starters, nobody is quite sure what to wear. (The official word is “LA chic.”)

In addition, the organizers have talked about making sure the show stays right around two hours, which could be bad news for any would-be Mickey Rourkes who find themselves on the podium. And the song parodies are out, to be replaced by performances by, among others, the Canadian hard-rock band Anvil.

(A month or two ago, I heard the tentative plans for one musical number; if they pull it off the way they were hoping to do, it’ll be a classic awards-show moment.)

Film Independent’s executive director, Dawn Hudson, says the show may well return to the beach in the future, but that FIND thought it was worthwhile to shake things up in this anniversary year.

Hollywood, and the independent film community, will render its verdict soon.

As for the other question – “who’s going to win?” – all signs point to “Precious” taking home the most trophies. Lee Daniels’ film is one of only six Spirit nominees that sent screeners to all 4,000 voters, and it’s had the highest profile of all the top nominees this entire awards season.

Other competitors in the Best Feature race include “(500) Days of Summer,” “Amreeka,” “Sin Nombre” and “The Last Station.”

“Precious” may well be primed to take home as many as five Spirit Awards: in addition to Best Feature and Best Director, the film has strong candidates in the Best Lead Female (Gabourey Sidibe) and Best First Screenplay (Geoffrey Fletcher) categories, and a near-prohibitive favorite, Mo’Nique, in the Supporting Female race.

Best First Feature could be a particularly intriguing race, with Oscar nominees “A Single Man,” “Crazy Heart” and “The Messenger” going up against the boxoffice hit “Paranormal Activity” and the small indie “Easier with Practice.”

Because the Spirit Awards generally honor smaller films than the Oscars, the hard-luck motto “win on Saturday, lose on Sunday” sprang up years ago. This year, “win on Friday, lose on Sunday” will almost certainly apply, since none of the Oscar favorites are in the running.

“The Hurt Locker” is ineligible because it showed at the Toronto Film Festival in 2008 and subsequently received Spirit Award nominations for actors Jeremy Renner and Anthony Mackie; “Avatar” and “Inglourious Basterds” both went well over the $20 million cap for Spirit eligibility.

The Spirit Awards are nominated by special committees, but the final vote goes to all members of Film Independent. According to Hudson, about half the members are professional filmmakers; the other half are divided between people who work in the film industry, and film aficionados who pay the $95 yearly dues.

John Cassavetes Award (for a feature made for under $500,000)
"Big Fan"
"Humpday"
"The New Year Parade"
"Treeless Mountain"
"Zero Bridge"