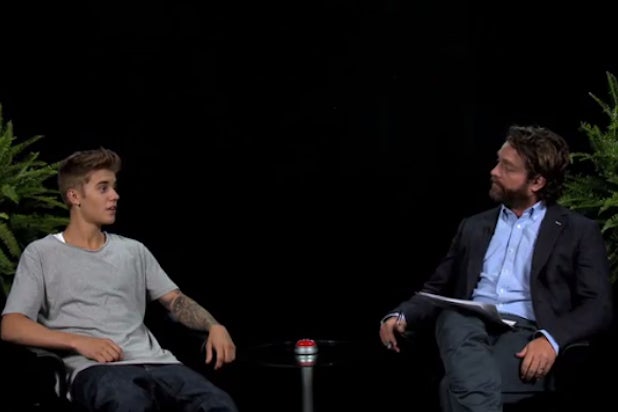 The New York Times reports that the  interview with President Obama will debut online at 7:30 a.m. EST on Tuesday on Funny or Die.

Galifianakis’s hilariously uncomfortable program is known for roasting its interviewees. The hirsute comedian famously told Justin Bieber “it’s really exciting to talk to you, especially right in the middle of your public meltdown” and whipped him with a belt for his bad behavior. He also is widely remembered for inartfully asking Natalie Portman for her phone number on the program. Other guests of the show have included Jennifer Lawrence, Jimmy Kimmel, James Franco and Ben Stiller.

Squirm-worthy questions about the president’s association with the “choom gang” are probably fair game in Galifianakis’s house.

President Obama had previously considered doing Galifianakis’s show to reach out to the youth vote for his reelection campaign but decided to do a Reddit AMA instead, his former social media editor Laura Olin tweeted.

Two Ferns came up as a possibility during the campaign, too, but we ended up doing Reddit instead.

Now POTUS is looking to connect with young viewers to get them to sign up for health insurance. According to the Times:

Mike Farah, the executive producer of “Between Two Ferns,” said the website’s creators approached the White House with the idea last summer after Mr. Obama reached out to Hollywood for help with the health care rollout. Mr. Farah said Mr. Obama was a good sport.

“I have to give the president credit that they were willing to trust us,” he said. “They were definitely easier than working with most Hollywood publicists.”

The six-and-a-half minute interview was recorded two weeks ago.