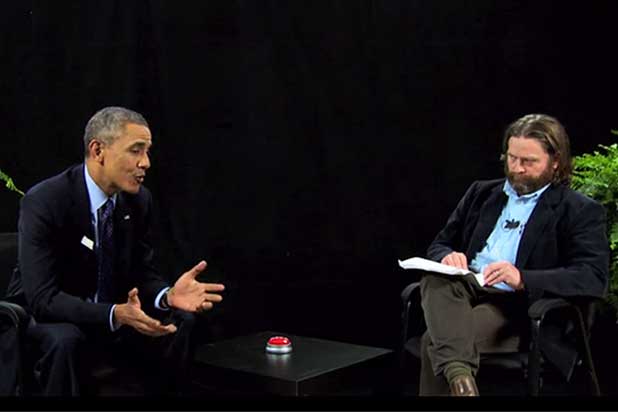 President Barack Obama was nominated for an Emmy on Thursday for his work with Zach Galifianakis on “Between Two Ferns.”

The hilarious, fern-filled interview they made for Funny Or Die back in March was recognized in the Outstanding Short-Format Live-Action Entertainment Program category. Galifianakis’ purposefully awkward show was also nominated last year, but it didn’t win.

President Obama becomes the first sitting President to earn an Emmy nomination, but Ronald Reagan won a Golden Globe in 1957 and George W. Bush won two Razzie Awards for his appearance in “Fahrenheit 9/11.”

If President Obama were to emerge victorious, it would bring him halfway toward a coveted EGOT (Emmy, Grammy, Oscar, Tony) sweep, as POTUS actually won Grammys in 2006 and 2008 for his spoken word albums “Dreams from My Father” and “The Audacity of Hope: Thoughts on Reclaiming the American Dream.”

See video: President Obama Asks If White House Pies Have Crack in Them

President Obama didn’t immediately respond to a request for comment, but he did tweet out this message a few hours after the nominations were announced:

“We’ve still got a long way to go…we know there are still a lot of folks out there looking for work.” –President Obama #OpportunityForAll

Don’t be so hard on yourself, sir — just being nominated is huge.