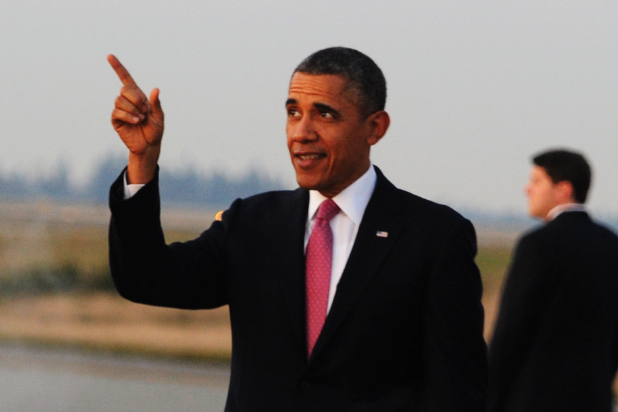 President Barack Obama will make the rounds in Los Angeles early this week on a trip that includes a reception at Magic Johnson’s house, a visit to Haim and Cheryl Saban and a Tuesday stop at DreamWorks Animation’s lot for an economic address.

The West Coast jaunt comes as the president’s approval ratings have sunk to new lows as the website for his new health care plan remains mired in technical glitches.

On Monday, President Obama will arrive via Air Force One at Los Angeles International Airport at roughly 4:35 p.m. PT.

He will attend receptions at the home of retired basketball star Earvin “Magic” Johnson in Beverly Hills, Calif., and at the home of Haim and Cheryl Saban. Haim Saban is the CEO of Saban Capital Group, and a longtime Democratic donor who has been an important supporter of the Obama administration’s approach to maintaining Israeli-U.S. relations.

On Tuesday, the president will attend a round table at the home of “Friends” producer Marta Kauffman and her husband Michael Skloff, the composer behind the sitcom’s opening anthem, “I’ll Be There For You,”  that is sponsored by the Democratic National Committee. The event replaces one that was cancelled in September so Obama could negotiate with Congress on possible military strikes in Syria.

A Democratic National Committee spokesman said about 30 supporters are expected at the event.

On Tuesday, the President will participate in a DNC event before traveling to DreamWorks Animation facility in Glendale, Calif., to deliver remarks on the motion picture and television industries — and their impact on the economy — at 12:15 p.m. He departs Los Angeles immediately after.

Past visits by the president have resulted in traffic snarls and closed streets, and this Hollywood excursion promises to be no different. Streets in Glendale, Beverly Hills and around Los Angeles International Airport will be impacted beginning Monday afternoon, the Los Angeles Police Department said.

The president’s arrival will not result in flight delays, a spokeswoman for LAX told TheWrap.