We may finally have a replacement for “The Nightly Show.”

On Thursday, Comedy Central teased a new late-night series, “The President Show.” Naturally, it’ll be hosted by a guy who calls himself “Late Night Donald.” Oh, and that dude claims to live at 1600 Pennsylvania Avenue.

Here’s the new (apparent) show’s description ripped right from its Twitter profile: “#1 show on television, many many millions of viewers. Hosted by @LateNightDonald. Bringing AMERICAN JOBS back to late night.”

Also Read: AD Miles to Step Down as Head Writer of 'The Tonight Show'

“The President Show” tweeted out the following today:

"Late night TV is broken. A TOTAL DISASTER. I alone can fix it!" https://t.co/u3HObey9FO

I'm going to be the most terrific, luxurious, fantastic late night show you've ever seen. It'll be Arsenio x10! https://t.co/W7ozaQfFHf

Just got off the phone. Thank YOU Viacom for NOT moving 30 million jobs to Mexico.

The REAL “climate change” is happening to late night. #HurricaneDonnie

Comedy Central had no further comment when reached by TheWrap‘s with a request for additional information. Based on the cagey press memo below, we didn’t expect a whole heck of a lot of details. 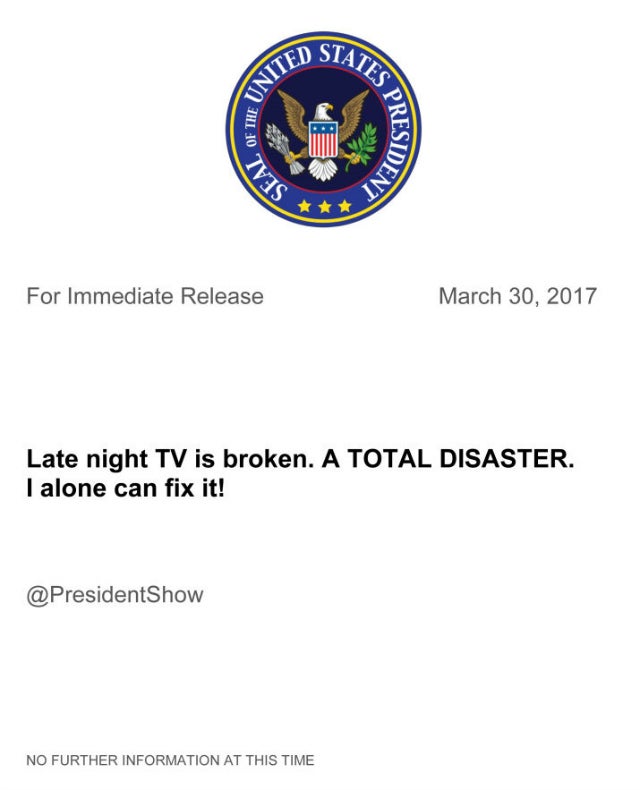