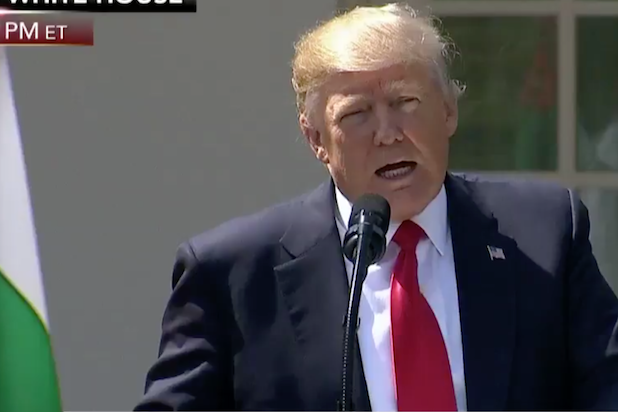 President Trump condemned a suspected chemical attack in Syria that killed over 70 people during a joint press conference with Jordan’s King Abdullah, saying, “The world is a mess… we’re going to fix it.”

Trump said he’s seen footage of children killed or injured during the attack and it changed his views on Syrian President Bashar al-Assad. He went on to discuss retaliation, saying al-Assad crossed the line.

“A chemical attack that was so horrific in Syria against innocent people, including women, small children and even beautiful little babies… their deaths was an affront to humanity,” Trump said. “These heinous actions by the Assad regime cannot be tolerated.”

The president has often criticized past leaders for publicly announcing plans to attack foreign nations, as Trump feels the best strategy is to strike by surprise.

“I’m not saying I’m doing anything one way or the other, but I’m certainly not going to be telling you,” Trump said when asked if he will take action against Syria.

President Obama famously said he would take military action if Syria used chemical weapons on its own people back in 2012. But, following just such an attack in 2013, the Obama administration worked out an arrangement with Russia that saw Syria admit to its chemical weapons — inspectors were then allowed into Syria and reportedly, most of the stockpiles were removed. Trump has repeatedly said the Obama administration failed when it had a chance to stop future chemical attacks.

“You will see, they will have a message,” Trump said about his plans to respond to the attack that happened under his watch. “It is now my responsibility.”