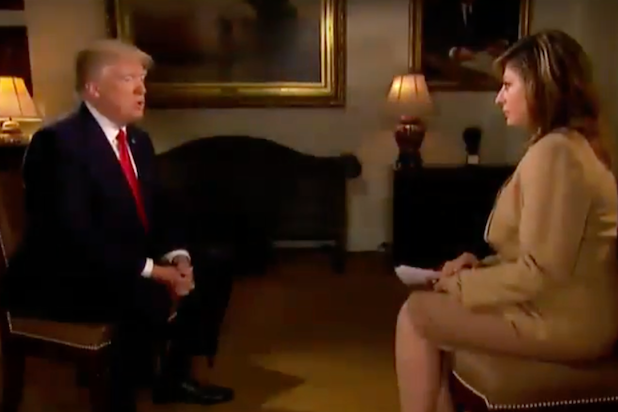 President Trump ripped Hillary Clinton on Wednesday morning, saying she was guilty of “every charge” for her use of a private email server and the handling of classified information.

“When Jim Comey came out, he saved Hillary Clinton. People don’t realize that. He saved her life,” Trump told Fox Business Network host Maria Bartiromo. “When he was reading those charges, she was guilty of every charge, and then he said she was essentially OK.”

Trump was responding to Bartiromo’s question: “Why are so many Obama-era staffers are still here?”

In asking, she cited Comey, who is an Obama-era staffer still atop the FBI, as an example.

“I have confidence in him, we’ll see what happens,” Trump said — after noting it’s “not too late” to replace him. “It’s going to be interesting… I want to give everyone a good, fair chance.”

Trump continued: “Comey was very, very good to Hillary Clinton, that I can tell you. If he weren’t she would be, right now, going to trial.”

When asked if he’s going to push charges against Clinton, Trump said he didn’t want to talk about it.

“I want to talk about positive,” he said.

Trump initially went on Fox Business to discuss tax reform. On Tuesday, Nielsen Media Research announced that FBN has now topped CNBC as the most-watched business channel for 13 straight weeks. It is well known that Trump is a ratings watchdog, so he was clearly aware of his audience.

“We are going to have we are going to have tax reform at some point very soon. I think we’re doing very well on health care. It’s been very much misreported that we failed with health care. We haven’t failed, we’re negotiating and we continue to negotiate and we will save perhaps $900 billion,” Trump said. “You know, if you look at the kind of numbers that we’re talking about, that’s all going back into the taxes. And we have to do health care first to pick up additional money so that we get great tax reform.”

He continued: “So we’re going to have a phenomenal tax reform. But I have to do health care first. I want to do it first to really do it right.”