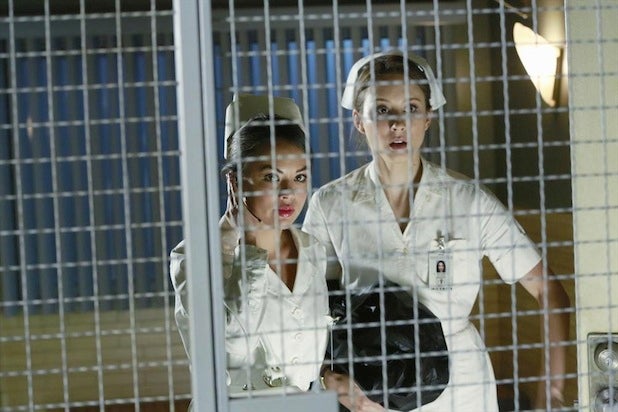 (Spoiler alert: Don’t read this if you haven’t seen Tuesday’s summer finale titled “Taking This One To The Grave.”)

ABC Family’s “Pretty Little Liars” made good on its threat of a major death on Tuesday’s summer finale.

The episode gave quite the sendoff to Mona Vanderwaal (Janel Parrish), the nerd-turned-beauty who was one of the show’s original victims of Alison’s cruelty. She fought to the very end in true Mona fashion, though.

Why did she have to die? We break it down.

Mona rejoins the Liars
The episode opens up with the four Liars pleading for Mona to help them. With Alison thrown out of the group, they knew it was only a matter of time before she got revenge on all of them. At that moment, she was at the police station spilling a story, which story they girls were unsure of. But, they knew it wouldn’t fare well for them.

Mona accepted on the condition that they keep her association with them a secret, even from their boyfriends.

Mona unlocks Alison’s police testimony
With Mona’s help, they were able to view the video of Alison’s questioning. It was clear to Mona that the police had connected Alison to Bethany Young, the girl whose body was in Alison’s grave, and Alison steered them to Spencer (Troian Bellisario). She told them how an angry Spencer approached her on the night of her disappearance, how she had seen the pills Spencer was addicted to and that she promised she wouldn’t say anything. The police probably drew the conclusion that a fragile Spencer would’ve done anything to keep the pills a secret, even kill someone if Alison wanted that done.

Mona and Spencer return to Radley
Having broken her promise to Mona, Hanna’s (Ashley Benson) boyfriend, Caleb (Tyler Blackburn), knew everything and was able to find that the police had received additional information from the mental institution, Radley. So in one of the crew’s greatest capers, Mona and Spencer dressed as nurses and returned to the place where both of them had once been institutionalized. With Caleb unlocking the security doors with his computer and Aria (Lucy Hale) working from the inside during her volunteer art class at the hospital, the girls made it into the records room to find out what the police knew about Alison and Bethany, also once a Radley patient.

Meanwhile, Det. Holbrook (Sean Faris) has arrived to speak with Aria and made it clear that his interest was in Spencer.

Just as they’re ready to pack up, Hanna discovers that Bethany had actually known Alison and wondered if she could be as awful as her mother, who was having an affair with her father.

Mona makes her last fatal discovery
While going through the Radley files at home, Mona discovers shocking evidence proving Alison lured Bethany to Rosewood and, in Mona’s mind, proves that Alison is “A.” The Liars rush to Mona’s home to learn more about her discovery, but it’s too late. “A” got there first and all that’s left are the signs of a struggle and blood on the walls — Mona apparently gave “A” a good fight.

Outside, Holbrook tells press that they’ve ruled Mona’s death a homicide despite the fact that there’s no body. And just as we hope that somehow that means Mona is still alive, we get a glimpse of her corpse in the trunk of a car belonging to “A.”

How do you feel about “PLL” killing off one of its coolest characters? Tell us in the comments below.