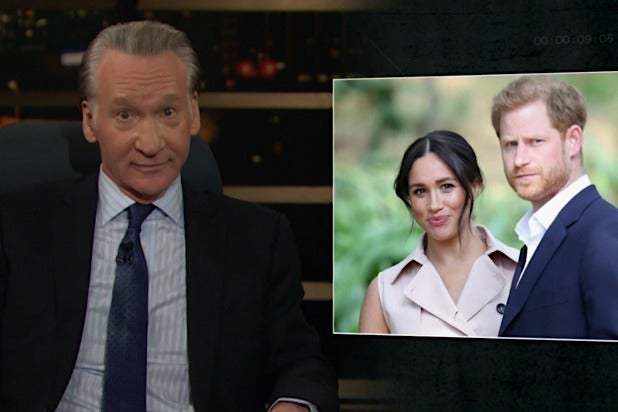 Prince Harry and Meghan Markle will give up the “royal highness” titles and will not receive public funding, following their decision to step away from the royal family, Buckingham Palace announced Saturday — coincidentally, the morning after Bill Maher prodded them to “go all the way” and completely separate themselves from the House of Windsor.

Queen Elizabeth II, in a statement, said she was happy to have “found a constructive and supportive way forward for my grandson and his family. Harry, Meghan and Archie will always be much loved members of my family.” Buckingham Palace added that Harry and Markle will repay about $3 million worth of taxpayer money that was used to renovate their home near Windsor Castle.

Bill Maher, during Friday’s episode of “Real Time,” applauded the couple for their decision to step away from royal duties and move to Canada — but added that they could do more.

“I give Harry and Meghan some credit, but not a lot,” Maher said. “If they want to be seen as a modern couple way hipper than the other stuffy ones in the family, okay, then go all the way and say it. Say, We’re not just taking a step back from royalty, we’re renouncing the whole outdated, racist, anachronistic lot of it. We’re saying loud and proud, what is this bulls— that some people are royal?”

Maher added: “Do you want to be remembered for greatness? Then burn your boats completely. Say it’s 2020, I hereby decree this birthright nonsense from the Middle Ages is stupid.” Watch Maher’s commentary at the bottom.

Saturday’s announcement comes after Harry and Markle announced last week they wanted to step down from being active, senior members of the royal family. Buckingham Palace said they will not be active members as of “spring 2020.”