In the middle of the media maelstrom after Prince’s death, I called a friend who I knew would be in an even sadder place than most of us. Joel Bernstein, a photographer and musician for rock luminaries including Neil Young, Joni Mitchell and Bob Dylan, often said Prince was the most uniquely gifted among the pantheon of artists he knew up close.

“On the last day of the year, 1987, Prince’s manager called. Prince was threatening to fire his whole band if he couldn’t get a decent guitar sound. He thought
his guitar sound was wimpy, and he wanted a rock sound. I was a guitar technician and photographer on a series of Neil Young tours, and I’d been asked before on a day’s notice to join the ‘Purple Rain‘ tour, and I couldn’t do it.

But soon after, he joined the “Sign O the Times” tour.

“So I started on New Years Day. I thought I was going to be there for a few days and fly home,” Bernstein said. “But when I got him the sound he was looking for, he wanted me to stay on and do the tour with him. It was a world tour and it started in Europe.”

I asked Bernstein about reports that Prince had been treated for an overdose last week.

“He was an adamant non-drug user,” Bernstein told me. “He didn’t want people using drugs around him. His energy was so intense that he didn’t need drugs.”

Bernstein recalled that Prince was introduced to Ecstasy by a friend in 1988, and under its influence, wrote an album that he later refused to allow to be released.

“There’s a line in one of his songs: ‘The world is designed to slow you down.’ That’s what life was like for him. He moved at a really fast pace. He was really nimble, really deft, quick thinking. The speed of the world was frustrating for him,” Bernstein said.

“He was the least lazy musician I worked for. He’d sleep for four hours a night and he’d wake up with grooves. He lived, breathed – it was all about music.

“All the stuff about sex and fashion and peforming — he understood all that. But his main thing was as a musician. He was Mozartian. That I would only say about him.”

Bernstein also had a take on Prince’s embrace of different spheres. (He used the present tense, but I’m not fixing it.) 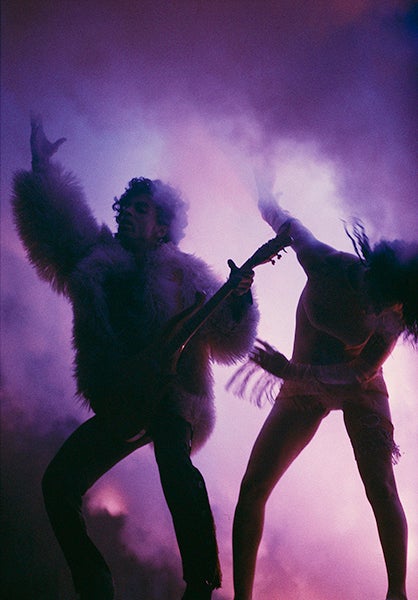 “He’s interested in spirituality, in the higher ground that Stevie Wonder refers to. He wants to take you there. He yearns spiritually for that.

Also Read: Prince and the Muppets R Here 2 Cheer U Up (Video)

He continued: “He was the best performer I ever worked for, the most talented musician in terms of raw talent. There’s a small number of us who go between these kingdoms. Dropping in on each one of these artist’s world — each one is a galaxy, or a kingdom that you’re visiting.

Also Read: Did TMZ Pay to Get Its Big Prince Death Scoop?

“At one point I remember being in rehearsal at Paisley Park. Prince was in the middle of a solo and one of his earrings flew off. And the music stops, and everyone looks for his earring. And I thought, ‘I guess you’re on the bus now.'”

More of Bernstein’s photos can be seen here: www.joelbernstein.com