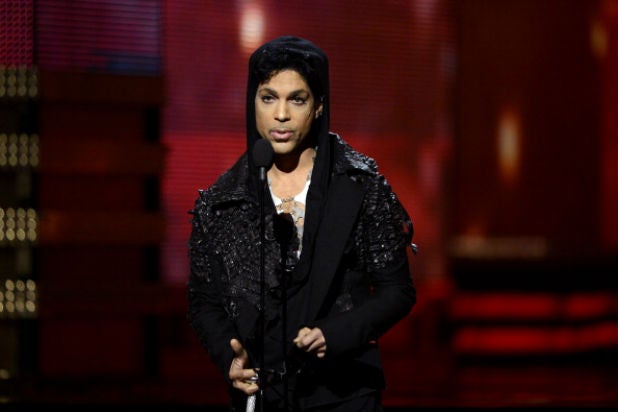 The music world shook Thursday when news that legendary singer Prince had died at age 57 spread like wildfire.

Stars from across the world of entertainment were quick to mourn the “Little Red Corvette” singer by sharing heartfelt tributes on Twitter.

“And just like that…the world lost a lot of magic,” Katy Perry tweeted.

TMZ reported that the singer’s body was discovered at his Paisley Park compound in Minnesota Thursday morning, while the Associated Press tweeted that the artist’s publicist confirmed “Prince has died at his home in suburban Minneapolis.”

‘I’m blown away. May he rest in peace,” Charlie Murphy said in a statement to TheWrap. “Music has lost one of its greatest icons.'”

Prince was an endlessly creative and prolific artist, knocking out instant classics including “Purple Rain” and “Sign O The Times” as well as daring, riskier works like “The Black Album.”

And just like that…the world lost a lot of magic ✨ Rest in peace Prince! Thanks for giving us so much…

I'm Crushed!! UK news reporting Prince Is Dead?! For Real?! Massive Loss for us all! What a Genius! Speechless.

Crushed to hear the news about Prince… What an artist. What an influence. Thank you for the love. And the funk ✨

I Miss My Brother. Prince Was A Funny Cat. Great Sense Of Humor. https://t.co/67umQghtbi

I am deeply saddened by the loss of the great one. Prince took music to the future only he could hear. May he rest in the funkiest peace.

RIP Prince. You were the king pic.twitter.com/RwKxVsOx8F

Today the doves will be crying purple tears #Prince

The Prince is dead. Long live the Prince.

I remember watching #Prince's Sign of The Times concert on VHS. I would watch it everyday. Fell more in love with @SheilaEdrummer too!

What a sad day today! Terribly sorry to hear that #Prince has passed! What an incredible talent… https://t.co/uxkUwX2PkA

Only now do we know what it sounds like When Doves Cry — the absence of music from loss of The Artist. RIP Prince (1958-2016)

Words cannot describe the gigantic crater left in the wake of the death of #Prince. This one truly hurts. RIP. The doves are crying.

I can't believe #Prince has passed. This is horrible news. #ripprince so sad 🙁 🙁

R. I. P to the King Prince thank u for inspiring me to be a Musician First and using this tool to heal people

This is what it sounds like when doves cry.. Prince R.I.P.
Condolences to his family & 2 us all

"Dearly beloved, we are gathered here today to get through this thing called life." Prince.

Saw Prince in concert more than any other artist. Soundtrack to my generation. 'When Doves Cry' was on every mixtape I ever made..#Icon

RIP Prince,much love/respect,never forget how cool he was to me in Minneapolis at 1st Ave Club when Purple Rain was on fire! Only love HH

Once, Prince yelled from the stage that I could dance. He was likely yelling to the girl behind me, but it's still my happiest moment. RIP.

As a kid, #Prince was the one who crossed all musical divides – soul, punk, rock, dance, new wave, pop – and brought us all together. RIP ❤️

Words fail with a loss of this magnitude. Prince was a rare genius, & despite news reports will absolutely live forever. Thanks for the joy

The amount of songs I have written in my career where I was trying to "do what Prince would do"…. I've lost count

Unbelievable just heard about PRINCE. Strength and light to his family/loved ones. One of my favs and a true pioneering artist. RIP brotha.

"Paint a perfect picture. Bring to life a vision in one's mind. The beautiful ones. Always smash the picture. Always every time." #Prince xo

Rest In Paradise Prince and thank you for blessing us all with your work n presence ????????

The iconic songwriter, singer and producer had dozens of hits throughout his decades-long career, including five No. 1 singles

The prodigious musical icon had countless hits throughout his career, here are just some of them.