(Warning: Spoilers ahead for “The Princess Switch: Switched Again.”)

Netflix is continuing what has now become an annual tradition of connecting its original Christmas movies with a special cameo featuring two key “A Christmas Prince” characters at the end of its Vanessa Hudgens-led “The Princess Switch” sequel.

In “The Princess Switch: Switched Again,” which launched Thursday, Duchess Margaret (Hudgens) is crowned queen of Montenaro, with many adoring friends and subjects in attendance, including her new husband, Kevin (Nick Sagar), her look-alike Stacy, a Chicago baker-turned-Belgravian princess who is also played by Hudgens, Stacy’s husband, Prince Edward (Sam Palladio), and her other look-alike, her scheming cousin Fiona (again, played by Hudgens).

But if you are paying attention to the other people in the crowd, you’ll notice three foreign royals cheering on Margaret in a blink-and-you’ll-miss-it moment: Aldovia’s Queen Amber (Rose McIver), King Richard (Ben Lamb) and their new baby, Princess Elleri.

The last time we saw those Aldovian monarchs was in 2019’s “A Christmas Prince: The Royal Baby,” when Queen Amber gave birth to their little girl.

We’ve never seen “A Christmas Prince” characters appear in Netflix’s “The Princess Switch” franchise before, but there have been mentions in the past connecting the movies — and some of the streaming service’s other original holiday films.

Also Read: Vanessa Hudgens Says She Will NOT Play a 4th Character for 'Princess Switch 3'

Yes, as “Princess Switch 2” star Hudgens told TheWrap last holiday season — when she appeared in Netflix’s “The Knight Before Christmas, which had its own Easter eggs — and again this year, “It is [all] very connected. The Netflix Holiday Movie Universe is definitely a thing.”

And that universe will only continue to grow with “The Princess Switch 3,” which has already been greenlit at Netflix and will begin production in Scotland soon for a 2021 holiday release.

But Hudgens told TheWrap one thing you can definitely expect will not grow with that film is the number of look-alikes she will be playing.

Also Read: All the Holiday TV Specials, Movies and Series to Watch This Season

“No, no, that’s just too outrageous. We’re already at max outrageous here with three characters; we’re just going to keep it at that,” Hudgens said. “And I would 100% lose my mind if I tried to add another me, even though it would probably be Scottish, [and] I love that accent and it would be a great excuse to master the Scottish accent. But no, that’s not happening.”

See a screenshot of “A Christmas Prince” characters Queen Amber, King Richard and Princess Elleri below. 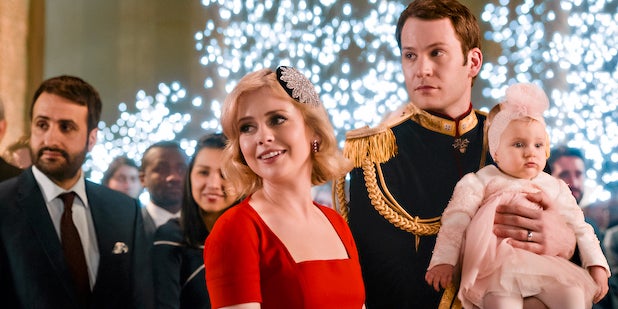