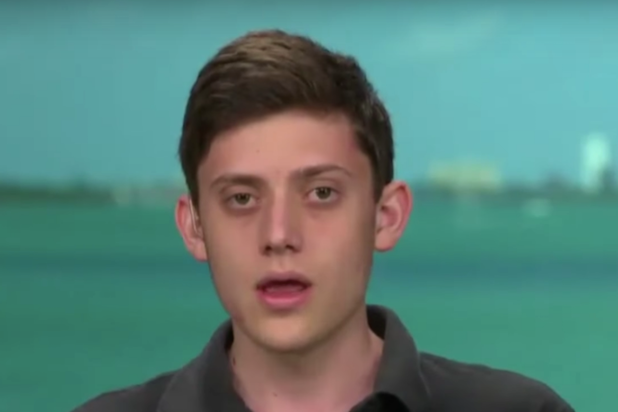 Kyle Kashuv, a pro-gun rights survivor of the February school shooting at Florida’s Marjory Stoneman Douglas High School, is accusing CNN of canceling a scheduled interview on Wednesday after he retweeted a story critical of the network.

Kashuv said that he had been booked to appear on Brooke Baldwin’s afternoon show on the news network but took exception to his retweeting a story that called the host a “fake news hypocrite.”

“My friend just got a call from @CNN. They’re canceling my interview because I quote RTed a Tweet where @ClayTravis called @BrookeBCNN a “fake news hypocrite” (and was quoted in the title). But don’t worry, CNN really wants to have the other side on, as long as they’re complicit,” said Kashuv.

My friend just got a call from @CNN. They're canceling my interview because I quote RTed a Tweet where @ClayTravis called @BrookeBCNN a "fake news hypocrite" (and was quoted in the title).

But don't worry, CNN really wants to have the other side on, as long as they're complicit https://t.co/t95zexPiF8

According to emails obtained by TheWrap, Kashuv had been scheduled to appear on “CNN Newsroom” at 3 p.m. ET with anchor Brooke Baldwin to discuss gun violence. The appearance was confirmed and ready to go when the network suddenly pulled the plug.

Reps for CNN did not respond to multiple requests for comment from TheWrap.

According to a person familiar with the matter, the network’s issue was a tweet Kashuv sent that ironically talked about how excited he was about his upcoming appearance — but retweeted a nasty bit of anti-CNN invective from Daily Wire’s Ryan Saavedra.

“They call and they go, ‘We can’t have someone on who openly says that our anchor is a fake news hypocrite and calls out our network,'” a person familiar with the matter told TheWrap on Wednesday. “That’s the only tweet. That’s the tweet they’re referencing.”

While Parkland students like David Hogg advocating gun control have been given wall-to-wall coverage on CNN and MSNBC, schoolmates like Kashuv who are more supportive of Second Amendment rights have been mostly shut out of mainstream media coverage.

The hit with Baldwin, coming five weeks after the initial tragedy, would have been his first one-on-one interview with the network.