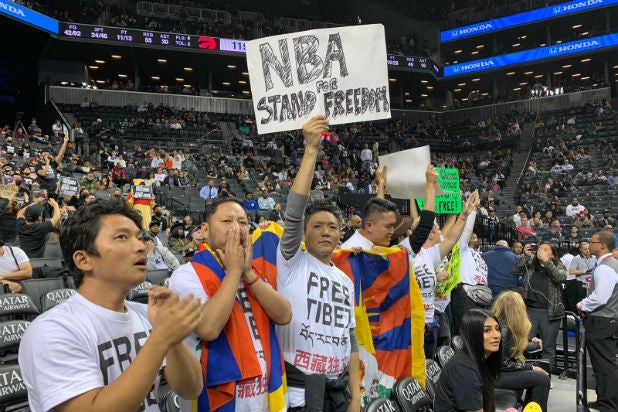 On Friday, several hundred pro-Hong Kong activists staged a protest during a preseason NBA game between the Brooklyn Nets and Toronto Raptors. They were joined by a smaller group of free-Tibet activists.

According to journalist Yashar Ali, activist and film producer Andrew Duncan bought 300 tickets for Hong Kong activists to attend the game at Barclay Arena in Brooklyn. Attempts to contact Duncan were unsuccessful, but the activists all wore black T-shirts that said “Stand With Hong Kong” in bold white letters. Some of them also wore Winnie-the-Pooh costumes; the character has been banned in China because it has been used to mock the country’s president, Xi Jinping.

Meanwhile, the Tibet activists shouted slogans, displayed Tibetan flags and carried signs that said, “Don’t let China buy our silence, people are dying to be free” and “Human rights matter, here and there.”

In a statement released after the game, a representative for the Tibetan activists said they were eventually told to leave by Barclay Center security. However, an individual close to the situation tells TheWrap that both the Free Tibet and Hong Kong activists were permitted to remain for the duration of the game. We have reached out for additional comment to representatives of the Tibet protesters.

The protests come two weeks after Houston Rockets general manager DarylMorey tweeted in support of the Hong Kong protests. In retaliation, the Chinese government canceled or postponed several NBA preseason events in China. The situation got worse after the NBA offered differing statements, tepidly defending Morey in English, and profusely apologizing in Chinese. Soon after, a bipartisan congressional group that included New York Rep. Alexandria Ocasia-Cortez and Texas Sen. Ted Cruz harshly criticized the league in a statement, saying in part that it is “outrageous that the NBA has caved to Chinese government demands for contrition.”

And on Oct. 9, two pro-Hong Kong protesters were kicked out of a preseason game between the Philadelphia 76ers and the Guangzhou Loong Lions of the Chinese Basketball Association.

1. Producer and activist Andrew Duncan bought 300 tickets to tonight's Nets vs Raptors game and is hosting hundreds of Chinese pro-Democracy activists to protest the NBA.

They're all wearing "Stand With Hong Kong" t-shirts pic.twitter.com/pIcUwSLaPB

5. More photos from the pro-democracy protest at the Nets game pic.twitter.com/uzkF9TbVvG