Wanna live a comfortable life? Watch more hockey. The NHL is the pro sports league that boasts TV viewers with the highest median household income, according to data obtained by TheWrap.

Per Nielsen, the median household income of a home that tuned in to any regular season and postseason NHL telecasts for the past year is $88,400. That’s $3,800 better than the No. 2 league, Major League Soccer.

There’s just something about international sports, we suppose.

Also Read: Network TV Shows With the Richest and Poorest Viewers, From 'Modern Family' to 'Empire'

PGA golf fans rank third with a median household income of $76,600. Par for the course.

Major League Baseball households are just $800 off the podium, our study finds. Insert your own “diamond” pun here.

The NFL, undeniably America’s favorite league to watch ranks fifth with a median household income of $73,000. Though National Football League ratings have dwindled, they’re still much better than the competition’s. Even anecdotally, you know you’re tuning in tonight for the opening game of the 2018 season.

We know what readers really want to know at this point — which league ranks lowest? That would be Ice Cube’s new-ish basketball venture, the Big3. Counting just the 10 telecasts that were available, the three-on-three hoops league has attracted an audience with a median household income of just (comparatively) $47,700.

The NBA is two slots and almost 20 grand higher, with NASCAR splitting the two b-ball leagues.

See them all ranked in the chart below, which in addition to median household income, also includes the number of telecasts counted for each league and their average viewership. 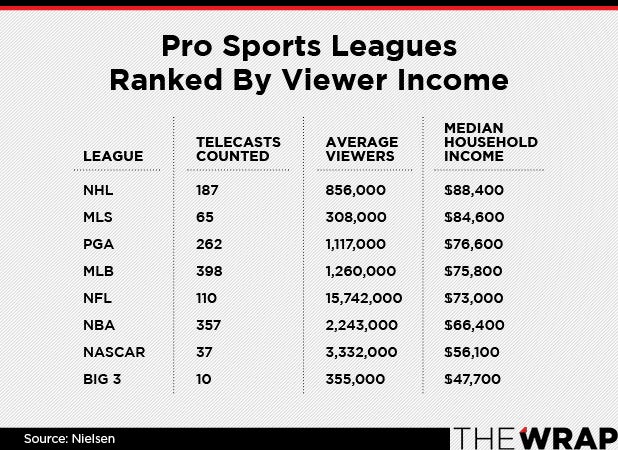