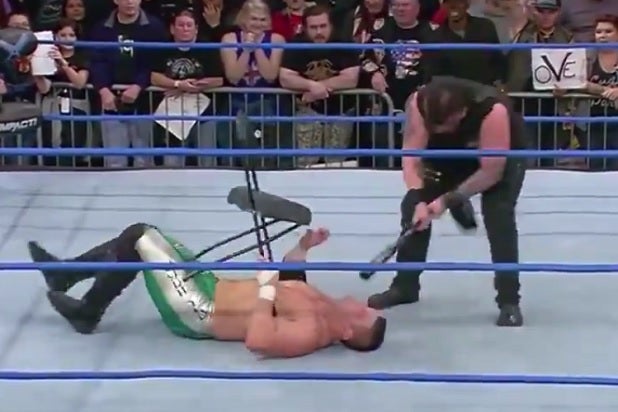 We don’t care what anyone says about pro wrestling being scripted — sometimes it’s all too real.

Impact wrestler Eddie Edwards found that out the hard way Thursday, when his ring opponent Sami Callihan brought a baseball bat down on Edwards’ face, sending him to the hospital.

Footage posted by TNT shows Callihan tossing a folding chair into the ring while Edwards lays prone, then climbing into the ring himself and unfolding the chair onto Edwards’ torso.

Callihan proceeded to bring the bat down on the chair. Unfortunately, the bat bounced off the chair and collided with Edwards’ face.

“Last night was the first time I saw this. Before seeing it I thought I was lucky, now I KNOW IM LUCKY. Broke face broke nose but ill be ok,” Edwards tweeted of the video.

Edwards also posted photos of the incident’s aftermath, showing his eye bandaged up and blood covering his face.

According to Impact, Edwards suffered “a broken orbital and broken nose.”

“Eddie was immediately taken to the hospital. We all wish Eddie Edwards a speedy recovery, but emotions were at an all time high last night and into the morning hours,” Impact wrote on its website. “The update on Eddie Edwards is that he suffered a broken orbital and broken nose. Doctors are saying that Eddie is luck [sic]to still have vision after suffering the shot from Sami Callihan.”

If you have the stomach for it, watch the [WARNING: GRAPHIC] video below.

This is sick. @TheSamiCallihan RUTHLESSLY smashes @TheEddieEdwards with a baseball bat and it violently ricochet’s right into Edwards’ face. #IMPACTonPop pic.twitter.com/fKtCAjiN7F

Last night was the first time I saw this. Before seeing it I thought I was lucky, now I KNOW IM LUCKY. Broke face broke nose but ill be ok https://t.co/JBjfngO4kG