(Warning: This post contains spoilers for the midseason finale of Fox’s “Prodigal Son.”)

Ainsley Whitly (Halston Sage) proved just how underestimated she is on Tuesday’s “Prodigal Son” when she managed to deceive her brother and expert profiler, Malcolm Bright (Tom Payne).

After last week’s episode ended with Ainsley showing up at Malcolm’s apartment covered in blood — having seemingly blacked out again before Malcolm could reveal to her that she was actually the one who murdered Nicholas Endicott (Dermot Mulroney) — tonight’s hour closed with Ainsley confessing she’s known the truth for some time now. But Ainsley only gave up that info to Malcolm after screwing with her big bro’s head for the better part of the “Prodigal Son” installment, titled “Face Value,” by creating an elaborate trap to suggest she might have committed another murder without knowing it, just to punish him for “gaslighting” her for months.

Here to break down the episode and Ainsley’s actions — plus what’s to come now that Alan Cumming’s Simon Hoxley is trying to piece together the Endicott case — for TheWrap is Sage herself.

TheWrap: When exactly did Ainsley figure out Malcolm had been lying to her, and why did she choose now to reveal she knew it was actually her who committed the murder?

Halston Sage: We were playing it sort of as Ainsley had known since the episode two weeks ago. There was a scene where Ainsley gives Malcolm an opportunity to come clean about that night when they have this really quiet scene in Martin’s old office in the house. And I confront him and ask him one last time what happened that night. I confide in him that I’ve started remembering some little details and it would be really useful if he could just finally piece it all together. And he make the choice to still not tell me. For anyone who was watching back then, they might not have noticed, but Ainsley kind of reacts in a way that’s disappointed to hear that he chose that path and chose not to tell her and she just has to come up with a way to make sure he never lies to her again, which is what happens in tonight’s episode. 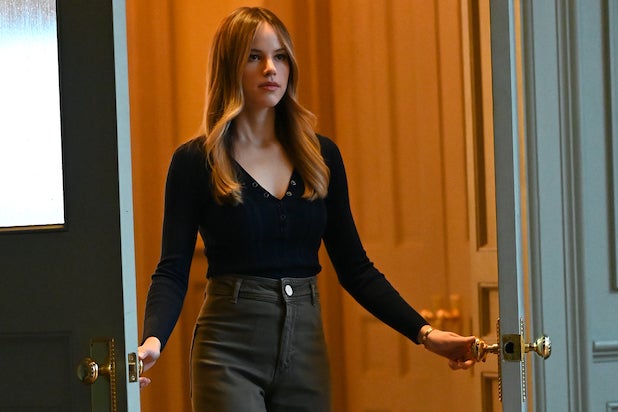 Malcolm apologizes to Ainsley for keeping the truth from her, though he says he did it out of love and was trying to protect her. And though he calls her scheme to get back at him “deranged,” it’s clear Ainsley doesn’t see it as more than a little bit “over the top.” Why do you think that is and where is Ainsley mentally right now?

It’s confusing that she wouldn’t fully understand the gravity of doing that to her brother. I think we saw a little bit of that when she was ruthlessly chasing the murder at the manners school as well. She’s kind of forgetting that there are human lives at stake and real people and real feelings, and her disregard or lack of acknowledgement of that has definitely started to become a trend. I think that’s what they start to unpack in the last few episodes of this season.

At the end of the episode, Nicholas Endicott’s frozen head is discovered in Estonia — where Malcolm shipped him off to in order to cover up the murder — and inspector Simon Hoxley arrives on the scene to express his suspicions surrounding Endicott’s death. He says he thinks Endicott was killed back in the States, so he’ll be heading to New York City to investigate further. What can you tease about how this will affect Ainsley and Malcolm, seeing as Ainsley just suggested tonight they’ve gotten away with it?

I can’t tease too much more, because I don’t want to give it away, but they definitely, finally have someone on their tail and they learn that they’re not 100% clear just yet.

Tonight’s episode was all about Ainsley confronting Malcolm for his role in this. But her father, Martin (Michael Sheen), and mother, Jessica (Bellamy Young), also knew she was the killer before she did — though they did want to tell her when Malcolm did not. Will Ainsley be seeking revenge on her parents too?

She definitely confronts the whole family about knowing over the next few episodes.

On last week’s episode, “Head Case,” a good portion of the plot takes place in Malcolm’s injury-induced dream world, where Ainsley is a doctor, like her father, who was never arrested for being a serial killer. What was it like to film that alternate-universe episode and play the similarities between Ainsley and Martin?

It was a very fun episode to shoot because you saw the whole family together outside of Claremont, which obviously no one had seen yet. And to play doctor was fun. I YouTube’d a lot of lingo and how to do an eye exam for a head injury and it was fun. But you’re right that they are really lining Ainsley up with Martin in the sense that she goes where he goes and she is who he is. That’s been the big question with Malcolm the whole first two seasons, so I think at this point, they’re just moving Ainsley into that same dilemma. Are you like your father or not? So now you’ve learned how Malcolm is and isn’t, and we’re starting to figure out how Ainsley is or isn’t as well.