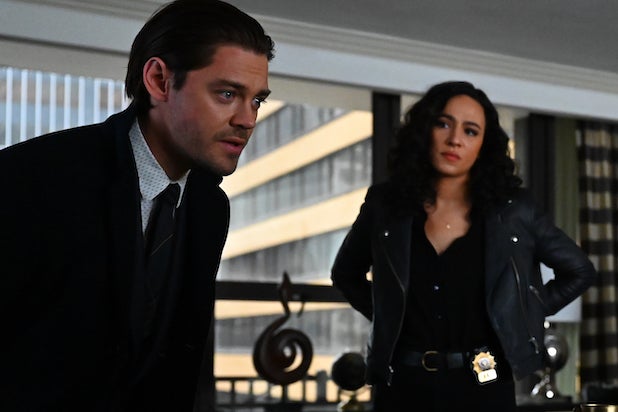 The first half of “Prodigal Son’s” second season comes to a close with Tuesday’s episode, “Face Value,” which comes one week after Malcolm Bright (Tom Payne) had an injury-induced dream in which his father, Martin (Michael Sheen) had never been caught for being a serial killer. In that episode, “Head Case,” a big part of Malcolm’s seemingly perfect world (seemingly, because his dad still was a murderer) was his romantic relationship with NYPD detective Dani Powell (Aurora Perrineau), whom in real-life is nothing more than his good friend and colleague.

Coming off that tease of a world where the profiler and detective are very much on the “they will” side of a the show’s will-they-or-won’t-they arc, TheWrap asked the “Prodigal Son” showrunners Chris Fedak and Sam Sklaver to tell us what the future holds for Malcolm and Dani, during a panel at Fox’s Television Critics Association press day Tuesday.

“I don’t know with Bright and Dani, how do you keep those two apart, right Chris [Fedak]?” Sklaver said. “They’re just so much fun on screen. I don’t know what to say.”

“It’s unfortunate when you have someone with such great chemistry– and we have such an amazing cast,” Fedak added. “It’s like, there’s obviously something there. And I think the one thing from Episode 6 is that we went into Bright’s subconscious. So obviously even though overtly he might not be thinking this every day and every minute, his mind is saying there’s a relationship there. There’s something percolating. We’re really interested in exploring that and we love all the relationships in our show. And it’s something that, when you have a cast like this, you just want to explore those relationships. And I think that’s also doubly so with the new relationship between Martin and Dr. Capshaw (series newcomer Catherine Zeta-Jones) in the infirmary. We’re working on episodes now where we’re just seeing like– I don’t know if it’s the Welsh component, or it’s just like they have incredible energy together. And it’s going to go to really bad and really entertaining places.”

Sklaver then posed this question to Perrineau, who was on the panel with the showrunners and her co-stars: “Aurora, I don’t know how it feels for you, but just watching the relationship between the two of you guys progress. We really do see you kind of like, become friends with this guy. Because when you first meet him, it’s like, Who the hell is this guy? And we’ve been slowly building through all of this– which I love. It hasn’t been first to romance, it’s really been first to friendship. And Bright is a weird guy to be friends with. And he comes from a pretty weird family. I don’t know Aurora if you want to talk about that more, but he’s been magical for me to watch.”

“Yeah, I think I agree that it’s been a really cool transition because it is very human,” Perrineau said. “You’re not into somebody as a person. And then as time progresses, you learn more about them more, about their characteristics, and who they really are. And I think that you guys do a really good job of making that transition really smooth and believable, and it’s really fun to play. Someone who’s learning about somebody in an organic way.”

Fedak added: “It is, unfortunately, when you write someone kissing in a script this year with the COVID protocols, it does require a hazmat team so we do have to be careful in that regard.”

On a completely unrelated topic, we asked Fedak and Sklaver to tell us if poor Gil Arroyo (Lou Diamond Phillips) will ever be getting a replacement for his beloved Pontiac Le Mans that was destroyed back in Season 1. Unfortunately, the answer is no. But there is some good news here.

“Gil’s Le Mans will not be coming back, but the car that Jessica [Bellamy Young] destroyed will actually be making a resurgence very soon,” Sklaver said. “I think there’s a there’s a nice Gil working under the hood of the car scene that’s also involved with Jessica. No double entendre there.”