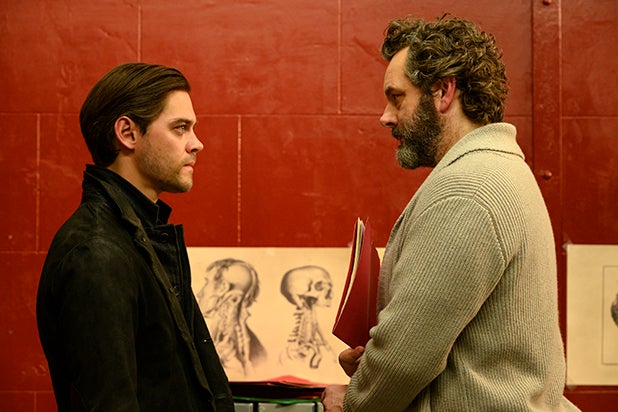 Fox has ordered nine additional episodes of new drama “Prodigal Son,” which is the highest-rated new show of the young fall season. That means the total is now a full season of 22 episodes.

“Prodigal Son” was created by showrunners Chris Fedak and Sam Sklaver, both of whom came by way of “Deception.” Greg Berlanti and Sarah Schechter also executive produce the Fox crime series.

The “Prodigal Son” back-nine order marks the first pickup of the fall season.

“‘Prodigal Son’ delivers a fantastic crime procedural with a complicated and compelling father-son relationship at its core, thanks to the stellar performances from Tom Payne and Michael Sheen,” said Michael Thorn, president of entertainment at Fox Entertainment. “The series has razor-sharp writing, cinematic visuals and is an inventive twist on the genre. We want to thank our executive producers, Greg, Sarah, Chris and Sam, Peter Roth and our partners at Warner Bros., and the entire cast and crew. We can’t wait to see how this twisted journey continues to unfold.”

The “twisted journey” centers on Malcolm Bright (Tom Payne), a psychologist who has a gift for understanding how serial killers think, because his father, Dr. Martin Whitly (Michael Sheen), was one of the worst, a notorious serial killer called “The Surgeon.”

Bright is the best criminal psychologist around and murder is the family business. He uses his twisted genius to help the NYPD solve crimes and stop killers, all while dealing with his manipulative mother, Jessica Whitly (Bellamy Young), his annoyingly normal sister, Ainsley Whitly (Halston Sage) and a homicidal father still looking to bond with his prodigal son, not to mention his own constantly evolving neuroses.

The only way Bright feels normal is by solving cases with the help of his longtime mentor, NYPD Detective Gil Arroyo (Lou Diamond Phillips). Arroyo’s one of the best detectives around, and he expects no less from his team — Detective Dani Powell (Aurora Perrineau), a headstrong no-nonsense cop who quickly becomes impressed with Bright’s work; and Detective JT Tarmel (Frank Harts), a born-and-bred New Yorker who questions whether Bright is a psychopath himself.