(Warning: This post contains spoilers for the Season 2 premiere of “Prodigal Son.”)

Fox’s “Prodigal Son” picked up its tale of twisted family dynamics with the premiere of its second season Tuesday, an episode that revealed what happened in the aftermath of the bloody murder that was committed by Malcolm Bright’s (Tom Payne) sister, Ainsley Whitly (Halston Sage), in front of her brother in the closing moments of the show’s finale last spring.

It turns out Ainsley’s crime, stabbing the evil Nicholas Endicott (Dermot Mulroney) seven times, has been covered up by serial-killer expert Bright with the help of the siblings’ serial-killer father, Martin Whitly (Michael Sheen), who walked Bright through the process of cleaning up his sister’s mess over the phone from prison, after Bright sent Ainsley away to protect her from what she had done, which at this point, she doesn’t even seem to remember.

The “Prodigal Son” Season 2 premiere, titled “It’s All in the Execution,” opens a few months after that night. Throughout the hour, fans find out what Bright did to save Ainsley in a series of flashbacks showing the cleanup. Martin finally gets more details himself when he sees his son for the first time in months during a prison visit, when he gets to reveal not just how thankful he is that Bright protected Ainsley — but that his son seems to share his talent for getting away with murder. Oh, and possibly enjoyed it, too.

TheWrap spoke with “Prodigal Son” showrunners Chris Fedak and Sam Sklaver about the episode and where things are headed from here for Martin, Ainsley and Bright — as well as their mother, Jessica (Bellamy Young) and Bright’s surrogate father, NYPD Lieutenant Gil Arroyo (Lou Diamond Phillips). See our conversation below.

TheWrap: Why did you decide to pick up the story with Bright in the middle of a case, standing on a ledge next to a suspect, rather than right after Ainsley slit Endicott’s throat?
Chris Fedak: We always intended to end Season 1 with Ainsley killing Nicholas Endicott, and that incredibly dramatic and crazy cutaway. And we were super stoked, even from the pitch, that that would be the finale. But when it came to picking up, we didn’t want to bind ourselves to coming back into the story in exactly that moment, especially since because from the time we went off the air last April to right now, we’ve had a crazy election, we’ve had a pandemic, we’ve had all these things and we just wanted to be able to reset Season 2 in its own kind of way. And when you have someone like Tom on your show, that’s where we came up with coming into the season in a new, startling, crazy, thrilling way. But we also know when you’re making one of these shows, we’re not going to spend a whole season slowly dripping information from that night. We know our audience is going to want to know what happened, they’re going to want to know those things. So we want to fill that info and that curiosity and fill in those blanks, too. 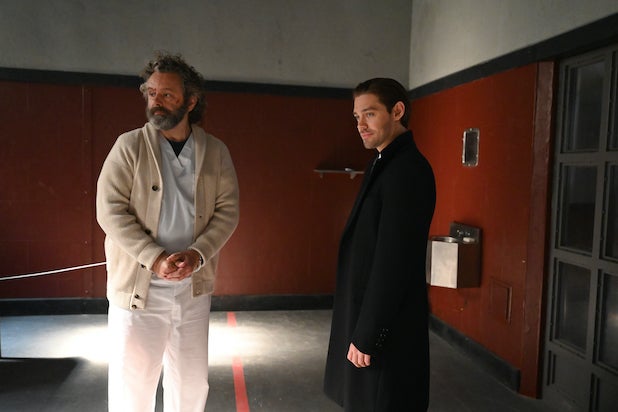 We find out Martin was able to talk his son through disposing of Endicott’s body over the phone from prison. How did Bright and Martin have this conversation safely in a way no one has found out about it over the past few months?
Sam Sklaver: If you remember at the end of Season 1, Martin Whitly helped instigate a riot inside of the prison that he was being held. And during that riot, one of the guard’s cellphones was thrown across the room and Martin was able to pick it up and talk to his son. And we never saw Martin hang up that phone. And beyond which, it was a phone that was never attributed to Martin and it was never able to be traced. So we were actually very cognizant of what we wanted to be able to do with our story.

First of all, we knew once Martin was going to be in Rikers– I remember early on, Chris and I wanted Ainsley to kill Endicott, we had all of our Girl in the Box story, but then we were like — Martin should probably start a riot in prison, right? Who doesn’t like a prison riot? It seems foolish to not like a prison riot. So once we knew there would be a prison riot, we started to think of all the different machinations of how we could get Martin and Bright together. And once that cellphone slid across the floor into Martin’s lap, it all made perfect sense to us. So that’s how they were able to communicate.

But, after that phone call, because Martin was locked down in the prison, he and his son stopped speaking. And they haven’t spoken until our premiere. So our premiere picks up a few months after our finale, but Bright and his father haven’t been communicating in the interim. So that relationship gets picked up right where we left it. And Martin is like our audience, he wants to know everything that happened and he misses his son and he’s on the edge of his seat.

Bright spends a lot of this episode dealing with his personal feelings about covering up a murder and at the end of the episode, his father pushes him to confront the fact he might have enjoyed the rush. Did Bright enjoy it and soon are we going to explore why?
Fedak: That’s the heart of the show: How much has Bright been affected by his father? The nature versus nurture of it all. Is there some piece of him inside that Bright needs to be aware of? And that speaks to the heart of the show. How much are we like our parents and can we actually get away from the people who raised us? That’s definitely the thing that we’ll be exploring this season. That was a revelation we had in Season 1. The first time we put the show in front of audiences, the reaction we had from people was, “When does the son start killing people?”And Sam and I were like, “What?” But Tom has given this kind of performance he’s got a look in his eye that there are people who see he’s playing so many different layers. And that’s fun for us. 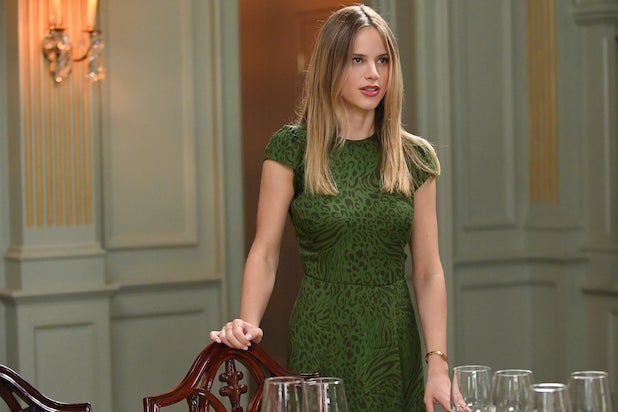 Being a notorious serial killer himself (“The Surgeon”), Martin is really excited to hear all the gory details about Endicott’s murder and how Bright continued to handle the cover-up after he hung up with his father. But when he talks to Bright, he also thanks his son, genuinely, for “saving” Ainsley and tells him it was the right thing to do. Does this make the cover-up easier for Bright to live with now?
Sklaver: It’s always been so important to us that our serial killer character, whenever we write him, or whenever we think about him, we don’t think about him first as a serial killer, but as a good dad. It’s really messed up that someone could be a serial killer and a good father. But that’s what got Chris most excited about the show from our first conversation about doing a show together. What if your father was a serial killer and he was also great, he was also funny and caring and supportive? And how much would that f–k you up.

And that’s always been the heart of the show and something that we wanted to go back to because when Bright helps cover up his sister’s murder, Martin is proud of his son. And what son doesn’t want his father to be proud of him? It’s like the ultimate goal. All any of us want is our parents to be proud of us. And it is so messed up when Martin says that he’s proud of his son. Like Chris was saying, the way that Malcolm Bright is portrayed by Tom Payne as just so tortured, it’s because it’s in his DNA, it’s how he was raised. He wants this support and this love from this terrible, evil man who is also charming and lovable in a lot of ways. He is a good father, that’s always been very important to us. It just so happens that he’s also a notorious serial killer.

Also Read: '9-1-1'/'Lone Star' Crossover to Air in February on Fox - Find Out Who Is Heading to Austin (Exclusive)

We don’t get much in the way of how Ainsley has been affected by the murder in the premiere — when is that coming up?Fedak: When it comes to Ainsley, she is going through her own trauma and that is in some ways delayed because Bright is protecting her from that moment. She essentially doesn’t remember. So for our guys going into it, this is something we know that as trauma begins to reveal itself, our brains protect us like “forget, forget, forget.” Well, that doesn’t last forever. And at a certain point, also, when you have an inquisitive mind like Ainsley, a person who is a reporter, if there is something she doesn’t know, like her brother, she wants to know the truth. Because not knowing the truth is terrifying, especially when you find out your father is a serial killer. So she is definitely a mystery box unto herself and we will get into episodes that very much focus just on Ainsley as well. 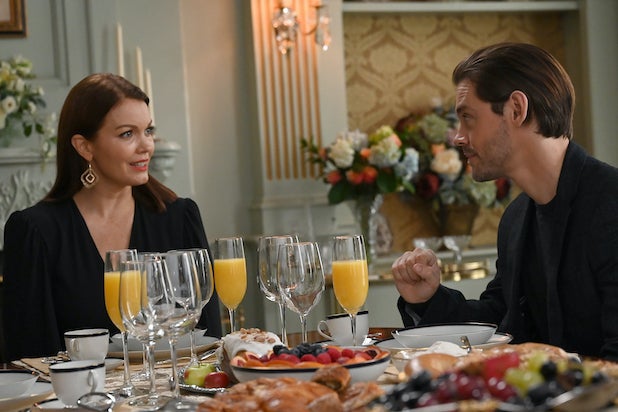 You teased us with some Gil and Jessica moments in the Season 2 opener, but I don’t get the feeling they’re all set to become a couple yet and I’m worried.
Sklaver: I have to say you’re right to be a little worried about Gilica, because very few things on our show get wrapped up with a happily ever after. And as much as Chris and I adore Lou Diamond Phillips and Bellamy Young together, it doesn’t really seem believable to me that they could live happily ever after in this moment. And they did have this electric moment in Season 1 where it felt like there was a chance for them. And we’re going to enter Season 2 with that same electricity between them.

But you know, when you’re married to a serial killer, usually romance is hard for you, as Jessica has found out with Nicholas Endicott. And I don’t know that her and Gil are going to end up happily ever after — right away. But that is one of the core relationships in our show. When we look at Bright, he’s always had two fathers: Martin Whitly, his serial killer father, and then he’s had Gil Arroyo, who is something of a surrogate father who has been looking out for him since he was a little boy. And that means Gil and Jessica have had a strong relationship that has seen all kinds of ups and downs and good times and bad. And I think we’re going to see all of those from them in Season 2.