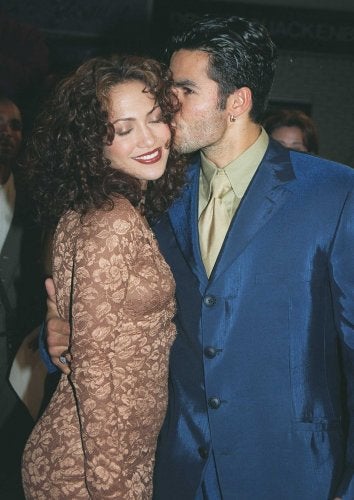 “Quiet diplomacy” is not a term that springs to mind about Ed Meyer’s attempts to win legal clearance to make a film about Jennifer Lopez and her ex-husband, Ojani Noa.

“I’m going to come out with a flamethrower,” Meyer promises of his next courtroom meeting with John “Jay” Lavely of Lavely & Singer, the high-powered law firm retained by Lopez.

In November the firm obtained an injunction temporarily blocking Meyer and Noa from making their film about the Noa-J-Lo relationship, and also from marketing 11 hours of home video footage taken by Noa during the 11 months he was married to Lopez, beginning in 1997. Without the footage, Meyer says, the interest of potential investors in backing Noa’s biopic “went to zero.”

“Lavely and Marty Singer have bullied Hollywood since 1982," a frustrated Meyer told The Wrap after a December 1 hearing in which the November injunction was extended. "It’s time people stand up to them.”

“If Judge Chalfant has a problem with this,” Meyer wrote in a widely circulated email, “he can have me hauled out of the courtroom in handcuffs in front of the world media."

That coup de theatre never happened, after Chalfant assured Lavely in court Dec. 1 that Meyer would indeed go to jail if he attempted such an action.

Meyer and Noa have since shifted gears and dropped their earlier plan for making their film a mockumentary called “How I Married Jennifer Lopez: The J-lo and Ojani Noa Story.”

Instead, Meyer believes he’s found a way to skirt the temporary restraining order and make the movie by only using publicly available material about J-Lo – including her alleged coziness with Miami underworld figures, particularly nightclub owner/murder suspect Chris Paciello. Meyer says there are about 10 books about the singer he and Noa can draw upon.

The retitled “Escape from Cuba” purports to be Noa’s rags-to-riches tale as a Cuban refugee, model and chef. Yet Lopez never seems to be far from the mise en scene — Meyer’s one-page treatment of the film is subtitled, “How I Created Jennifer Lopez.”

“Ojani,” says the treatment, “creates & manages the career of the girl of his dreams, and turns her into an international movie & recording star, with the help of the Mafia. Negotiating contracts for her worth tens of millions of dollars!”

Meyer claims a marital settlement agreement signed by the couple prohibits either from “unreasonably withholding consent” to the other’s artistic projects, and that Lopez’s $10 million lawsuit and other legal actions have violated that agreement. He also says Lopez deliberately understated her financial worth at the time of the divorce in order to stiff Noa out of a larger settlement.

“The crux of this case is that this is a bad divorce,” Meyer says. “She’s unreasonable. She’s a Puerto Rican woman scorned – that’s what we have here.”

Meyer is clear about his intentions: He wants nothing less than to force Jennifer Lopez onto the witness stand, where he can grill her about her finances.

Meyer is represented in court by Frank Sanes, a mild-mannered Baldwin Hills attorney. Noa, however, has not been able to find a lawyer to take his case, which Meyer ascribes to a fear among attorneys of Lavely & Singer’s wrath. Describing Jay Lavely as “a rattlesnake,” Meyer accuses him of improperly contacting him directly, rather than going through Sanes. (Lavely did not respond to a request for comment.)

Meyer says he is preparing to sue Lavely for these communications. If this weren’t enough, Meyer has also accused Lavely of contacting Joe Estevez, Martin Sheen’s lesser-known acting brother and the star of a planned Meyer reality TV show, in order to glean information about Meyer’s court strategy.

In any event, Meyer is confident he will begin shooting “Escape From Miami” soon, with Noa playing Noa.

“My hope for shooting is at the end of January. I think we’re ready to go.”

The end of January – the 29th, to be exact – is also the next court date for Meyer, Noa and Lavely. At issue is whether the war between the two sides should remain in the courts or be sent to an independent arbitrator. Superior Court Judge William Fahey will preside.

In a recent emailed message to his Frank Sanes, Meyer assures his attorney that he has proof that Lopez violated the marital settlement agreement she’s signed with Noa.

“Jay is in for a rude awaking when we show up with this documentation,” Meyer writes.

The next hearing promises to be neither quiet nor diplomatic.