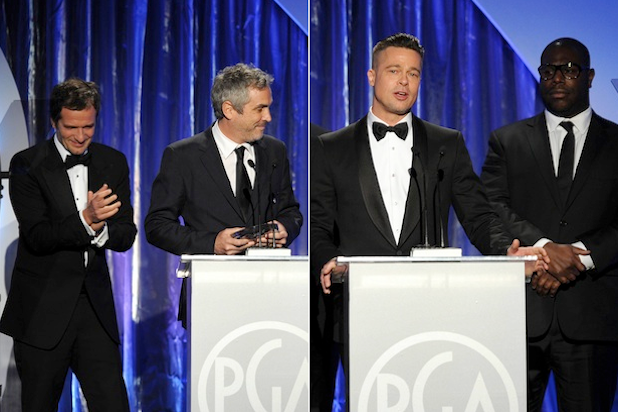 The Producers Guild of America Awards ended in a shocking and unprecedented dead heat on Sunday night at the Beverly Hilton Hotel, with “Gravity” and “12 Years a Slave” tying for the top film award.

Following the SAG Awards ensemble victory for “American Hustle” on Saturday night, the result means that each one of the top three contenders for the Best Picture Oscar emerged from the first weekend of guild awards with a key win. And it brings no clarity at all to what was already a tight, confusing race.

It was the first feature-film tie in PGA history — and indeed, the first time any of the major Hollywood guilds has ever declared a tie in its top film category.

Going into the show, it seemed logical to think that the PGA winner would become the Oscar frontrunner. The guild’s feature-film winner has gone on to win the Oscar for Best Picture 17 times in the 24-year history of the award, including the last six years in a row.

Crucially, the PGA followed the Academy when it expanded its best-picture field from five to 10 nominees – and the PGA is also the only other awards body that counts its final ballots in the top film category using the preferential system, which rewards consensus favorites.

Producers Guild victories for “The Hurt Locker,” “The King’s Speech,” “The Artist” and “Argo” were key signs that those films had what it took to triumph at the Oscars.

But by ending in a tie, the PGA only showed that this is indeed the closest Oscar race in years, and that none of the top contenders can be ruled out. Even “American Hustle,” the odd-man out on Sunday among the top three, has strong support among actors, who make up by far the largest branch in the Academy.

After seeing “Hustle” come out on top on Saturday, both “Gravity” and “12 Years a Slave” badly needed the PGA victory. The tie throws extra emphasis on next weekend’s Directors Guild Awards, where “Gravity” director Alfonso Cuaron is considered a slight frontrunner over David O. Russell for “American Hustle” and Steve McQueen for “12 Years a Slave.”

The following weekend’s WGA Awards will be less conclusive, because “12 Years a Slave” is ineligible and “Gravity” was not nominated – meaning that it’s likely this race will go down to the wire as a tossup.

“Hustle” has the actors, “Gravity” has the below-the-line craftspeople, and “Slave” has a critical consensus that seems to be carrying over even into voting bodies (like the producers) that might not seem to be its usual supporters.

And everyone has a race to remember.

What makes the PGA tie even more remarkable is the preferential system of counting. Voters did not simply choose their favorite of the 10 nominees — they ranked the nominees 1-10 on their ballots, and the PGA’s accountants redistributed the ballots of the least popular films one by one, until all that mattered on each ballot was whether “Gravity” or “Slave” was ranked higher.

If the outcome was a true tie — which presenter Ben Affleck said he’d been assured it was — that means that exactly the same number of the PGA’s more than 6,000 voters voted for “Gravity” over “Slave” as voted the other way around.

While the shock that came at the end of the night left the crowd and the awards community buzzing, the Producers Guild had also given out two-and-a-half hours of awards before that moment.

Alex Gibney’s “We Steal Secrets: The Story of WikiLeaks” won the PGA Award for documentary feature over a field that didn’t include any of the Oscar doc nominees. “Frozen” was named outstanding animated feature.

On the television side, “Breaking Bad,” “Modern Family” and “Behind the Candelabra” added to their overstuffed trophy cases with more victories.

The complete list of nominees — winners indicated in bold: