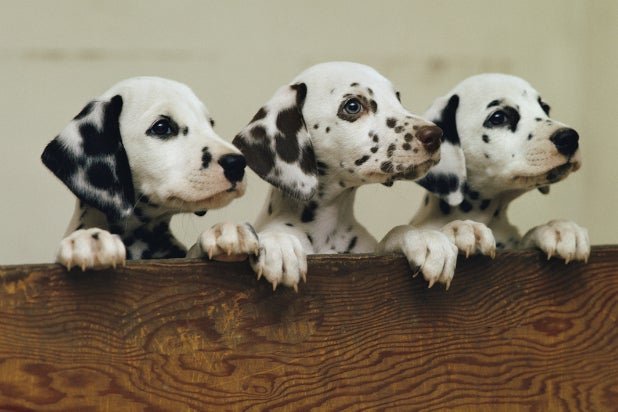 “Project Puppy” (pictured) will bring viewers into the homes of six families raising new puppies, proving that it’s not always licks and Milk-Bones. “Animal ER” takes place in Texas, at a veterinary facility where they treat every species from from bighorn sheep to seals.

“Savage Kingdom” tells the true story of ruthless predators and powerful prey embroiled in rivalry, betrayal, battle and triumph, per Nat Geo Wild. You can read more about these new projects, as well as returning ones, below.

“Nat Geo Wild is the ONLY network on television 100 percent dedicated to animals and the people that love them,” said Courteney Monroe, chief executive officer, National Geographic Global Networks. “In six years on the air, we have never deviated from our mission with Wild and this year’s upfront slate further strengthens our commitment. Our six straight years of growth speaks for itself.”

“At Nat Geo Wild, our job is to bring a bit of the Wild into viewers’ lives every day,” added Wild’s Executive Vice President and General Manager Geoff Daniels. “Our new upfront slate will leave our growing family audience wanting more, with unexpected and unfiltered original programming, making us the No. 1 destination for people who love animals as much as we do.”

Here’s the full slate, in Nat Geo Wild’s own words:

Returning Series
THE INCREDIBLE DR. POL (National Geographic Television)
Nat Geo WILD’s No. 1 series features America’s favorite veterinarian saving lives, birthing animals large and small and caring for thousands of species throughout rural Michigan. He is perhaps the hardest-working, most empathetic and no-nonsense vet out there. He isn’t afraid to make the difficult decisions to do what’s best for his patients and their hard-working owners.

OAKLEY, YUKON VET (Lucky Dog Films)
Dr. Michelle Oakley is back making house calls across thousands of square miles of the Yukon, where she dodges claws, scales boulders and tranquilizes lethal predators. With an office that spans a rugged area the size of Texas, this super vet ventures across dense wilderness to treat everything from baby moose to 700-pound muskox.

K’S EXOTIC ANIMAL ER (Spectrum Field Productions, LLC)
Dogs and cats are the only pets you won’t find in this south Florida vet’s office. Whether it’s emergency surgery on a squirrel monkey or X-rays on a skunk, there is no such thing as a boring day at Dr. Susan Kelleher’s exotic animal ER. She treats any animal that can walk, crawl, fly or slither through the door.

CESAR 911 (Leepson Bounds Entertainment)
Our favorite dog behaviorist, Cesar Millan, is back rescuing neighborhoods terrorized by badly misbehaving pooches. Each week he is called in by whistleblowers who tell on four-legged thugs that scare neighbors, clients, friends and even family members. Cesar surprises dog owners on their own turf to witness the chaos firsthand, and then he uses his unmatched expertise to restore balance between dogs and humans.

SAFARI BROTHERS (Symbio Studios)
Brent and Grant Reed’s backyard is the wildest place on earth — Botswana, Africa’s Okavango Delta. Together they’ve built one of the area’s most successful safari companies, living and working alongside the most iconic animals on earth. Follow this charismatic duo as they navigate the challenges of running a company in the wilderness, from pulling 4x4s out of rivers to removing venomous snakes and scorpions from camp, to negotiating elephant-sized roadblocks.

New Series
ANIMAL ER (Propagate Content)
Down in south Texas, there is no place more equipped to treat exotic, farm and domesticated animals than the Gulf Coast Veterinary Hospital. It boasts more than 55,000 square feet and a staff of 235 specialists, doctors, nurses and technicians. Go behind the scenes with staff members on the cutting edge of animal care and follow patients — from bighorn sheep to seals — as they are rushed into the ER, through diagnosis and treatment.

PROJECT PUPPY (Blast! Films)
Thinking of adopting a dog? This is must-see pooch TV. You are invited into the homes of six families who are raising adorable fur balls with cameras following their every move. Find out what no one tells you about bringing up pup, and learn from the successes and mistakes of these passionate pet parents.

PET TALK (Leepson Bounds Entertainment)
America loves pets. Sixty-two percent of households include an animal family member, but there’s never been a prime-time talk show devoted to them until now. The ultimate talk show for animal lovers, Pet Talk is a weekly series hosted by two veterinarians, a wildlife expert and a field reporter who provide the latest pet news, advice and fascinating personal stories. No trip to the vet required.

Destination Wild Natural History Specials (Sunday Nights)
WILD NEW ZEALAND (BBC Natural History Unit)
Hidden away on the far side of the world is a spectacular wilderness — a place of fabled landscapes and a land that time forgot. It is the home of bizarre wildlife, gentle and strange creatures that live by different rules: penguins in rainforests, birds that act like mammals and prehistoric predators. It’s rocked by the most geological forces on earth and it’s so distant, it was the last place to be found and settled by people. Welcome to the lost world of New Zealand.

WILD ASIA (Terra Mater Factual Studios)
The islands of Southeast Asia are the most spectacular and diverse on earth. They are home to the majestic, the beautiful and the downright bizarre. In the tropical forests that drape the rugged slopes, giant red apes swing through the canopy, pigs box and kangaroos climb trees. But most astonishing of all is that this wondrous beauty and diversity is the result of nature’s most destructive force: the power of the earth.

GRIZZLY EMPIRE (National Geographic Studios)
Hallo Bay on the Alaskan Peninsula is a kind of grizzly bear nursery where every year mother bears come to raise their young. But Hallo Bay has a dark side. Huge males roam here, and they will frequently kill cubs. When they show up, the momma bears flee. All, that is, except Ursa, a mother raising her three young. On average, one out of every two grizzly cubs dies before reaching one year old. Ursa’s family is not immune to these odds. What drama awaits them over the course of the summer?

MAN v. OCTOPUS (NHNZ)
Since ancient times, sightings of a massive, eight-legged sea creature have spawned myths of a monster that can sink boats and swallow men. It’s been called everything from kraken to leviathan. But the truth is even wilder than the legends. The giant Pacific octopus can grow up to 100 pounds and boast an arm span of 16 feet. It can roam 6,000 feet below the ocean surface. It has no bones. It can change color and texture at will. And it can bite with its beak and inject venom into its prey. It’s an escape artist — and the most intelligent of all invertebrates on the planet.

Events
SAVAGE KINGDOM (Icon Films)
SAVAGE KINGDOM is the true story of ruthless predators and powerful prey embroiled in rivalry, betrayal, battle and triumph. It is a never-ending crusade for survival with characters so wild and ambitious, with conflict so cutthroat, that no fiction can do it justice. Each episode presents the battle from one character’s point of view, exposing the front lines of clan warfare — from a mother’s sacrifice to a father’s rage at his own son. This is a world where no one stays on top for long, and it’s an epic natural history series like no other.

BIG CAT WEEK (GLOBAL)
2017 marks the seventh annual Big Cat Week and a move from November to the start of the New Year to show our love for the world’s most extraordinary big cat species. Big Cat Week is a long-term commitment by the National Geographic Society to stop poaching, save habitat and sound the call that big steps are needed to save big cats around the world. To date, there will be four special premieres:

BARKFEST III
Calling all dog lovers! Nat Geo WILD is gearing up for its third annual BarkFest weekend, featuring all dogs all the time. Tune in, learn something and brace yourself for the cuteness. BarkFest premieres spring 2017.

Sharkfest
SHARK!!! It’s one of the most feared animals in the ocean. But we’re leaving the scare tactics and mockumentaries to others. We’ll spend a week celebrating these awesome jaws with wall-to-wall shark action and fun facts about this amazing species. Explore the in-depth profiles of individual species, including great white, hammerhead and reef sharks. With insights from shark experts, scientists and filmmakers, we get a comprehensive look at what makes this animal tick.