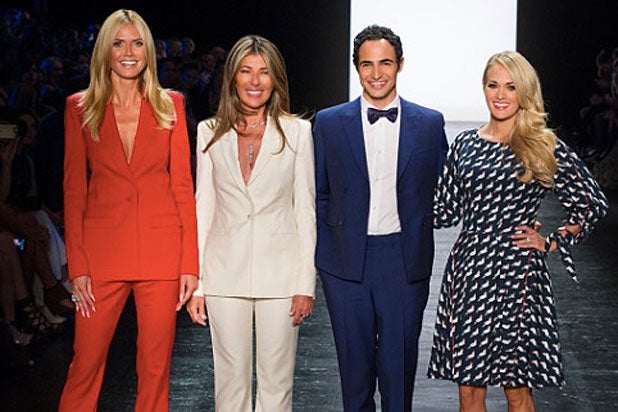 (Spoiler alert: Please do not read on if you haven’t watched Thursday’s episode of “Project Runway”)

It came down to contestants Kelly Dempsey, Edmond Newton,  and Ashley Tipton creating a Fashion Week collection for a chance to win the top prize on the Lifetime reality show.

“I would describe my style as having fun and being funky, showing your personality through your clothing and having fun with it,” 24-year-old Tipton from San Diego, California, told E! News before the finale aired.

While many people on social media commended the show for taking a stance against stereotypical stick-thin models by naming a winner who specializes in plus-size designs, some thought the judges crowned the wrong designer for the sake of choosing size over style.

“These judges tell the designers not to play it safe and explore, and when they do, the one who doesn’t try anything new wins,” one outraged Twitter user wrote.

“When #ProjectRunway is just trying to be politically correct, rather than basing the win off of talent. #bye,” wrote another.

That was just the start. See the tweets below.

Nina's gonna sit THERE and tell ME in THAT FABULOUS SUIT that ASHLEY WON?! No. I'm sorry. #ProjectRunway #porfavor

These judges tell the designers not to play it safe and explore, and when they do, the one who doesn't try anything new wins. #ProjectRunway

Wow. I've never been this disappointed in #ProjectRunway. It was a gimmick and wasn't as good as #DesignerKelly's work.

When #ProjectRunway is just trying to be politically correct, rather than basing the win off of talent. #bye

Jokes on us; we sat through a week's worth of commercials crammed into two hours, for what was probably the worst #ProjectRunway finale win.

#ProjectRunway I don't care about size. I am no twig. But Ashlee's clothes were cartoonish. What was fashion forward about any of them?

So the designer who glued on flowers & had a zipper break before the runway was the WINNER.??Really?? Over @Kelly Dempsey's?! #ProjectRunway

I finally figured out where I have seen Ashley's collection. The clearance section of Torrid. #ProjectRunway

As punishment, Nina should be forced to wear that purple lace number and floral headdress on the cover of Marie Claire #ProjectRunway