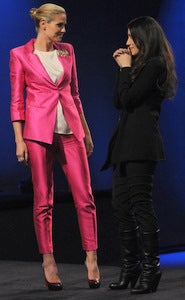 Thursday night’s season-six finale of "Project Runway" was the highest-rated episode of the season among key demos, Lifetime Television said.

In its first season on Lifetime after five on Bravo, "Runway" is cable’s highest-rated reality show among women and households this year, as well as most watched, the network said.

The show was followed by the season-one finale of companion series "Models of the Runway." Kalyn Hemphill was the program’s last model standing, and her triumph generated a 1.1 rating among women 18-49 and a 1.3 household rating, averaging 1,475,312 total viewers.

"Project Runway" will return to New York next season, premiering on Thursday, Jan. 14, at 10 p.m. That will be followed at 11 p.m. by the season-two premiere of "Models of the Runway."

For the first time, both shows will be shot and distributed in high-definition.

Both series are produced by the Weinstein Company, Miramax Films, Bunim-Murray Productions and Full Picture.