The Twitter account for James O’Keefe’s Project Veritas was permanently suspended on Thursday after the far-right activist group posted a video confronting a Facebook vice president outside his home.

Project Veritas, a self-described “non-profit journalism enterprise” noted for using secret recordings and sometimes misleadingly edited footage to expose “corruption” at mainstream media outlets and progressive groups, had more than 700,000 followers at the time it was banned.

On February 10, Project Veritas tweeted a video of reporter Christian Hartsock approaching Facebook VP Guy Rosen outside his home. Rosen, who appeared to be returning from a jog, didn’t respond to Hartsock asking him about a recent video where Rosen said Facebook can “freeze” comments on posts that may contain “hate speech or violence.” (You can view the video here.)

“How do you define hate speech?” Hartsock asked Rosen as he walked inside. “Is it just speech that you hate?”

Later, at about 2 a.m. ET on Thursday, Twitter contacted Project Veritas by email and said its account was locked for violating the company’s rules against posting private information. Founder James O’Keefe also had his account locked for sharing the video.

“You may not publish or post other people’s private information without their express authorization and permission,” the email explained. 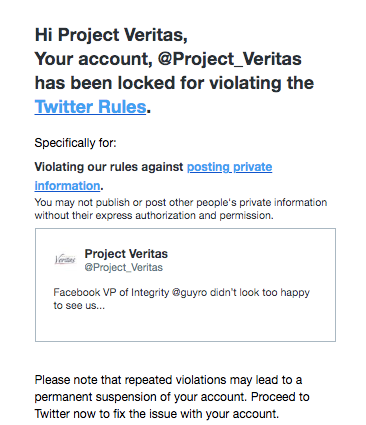 In the video, the numbers on Rosen’s home address are visible, but the street name is not.

Both the Project Veritas account as well as O’Keefe’s account have not sent tweets since midday Wednesday.

Twitter did not respond to TheWrap’s requests for comment when this story initially ran on Thursday, reporting both Project Veritas and O’Keefe’s accounts had been locked. A Twitter rep later told TheWrap Project Veritas’ account was banned for repeated violations of its rules, although the rep did not explain how the outlet’s video violated its rules. The rep said O’Keefe’s account was locked and could only be reactivated if he deleted the tweets tied to the video.

In a phone interview with TheWrap, O’Keefe said he’s “wrestling” with the decision to delete the tweets in order to get the accounts running again.

O’Keefe also said he’s confused by Twitter’s actions, considering the home address for Rosen isn’t visible in the video. “What I’m trying to understand is, what about what we did is quote ‘posting private information’?” O’Keefe said.

Project Veritas communications director Eric Spracklen later told TheWrap that Twitter had not explained to the outlet what it considered private information in the video.

Project Veritas, which has a long and documented history of failed sting operations, and also of releasing deceptively edited and out of context videos, has conducted an operation it calls “Expose CNN” since 2017. The effort includes the release of undercover footage and audio purporting to show bias at the network. So far, the cable channel has largely laughed off these videos.