Donald Trump was greeted by a small army of protesters Tuesday as he arrived for a speech at the USS Iowa in the San Pedro neighborhood of Los Angeles.

Chanting “no fascists, no KKK, no Racists, USA!” and “Donald Trump is a racist!” about a thousand protesters took part in a boisterous rally at the waterfront promenade in front of the battleship.

“My dad actually immigrated from Mexico,” protester Danny Manriquez told TheWrap. “No human being is illegal.” 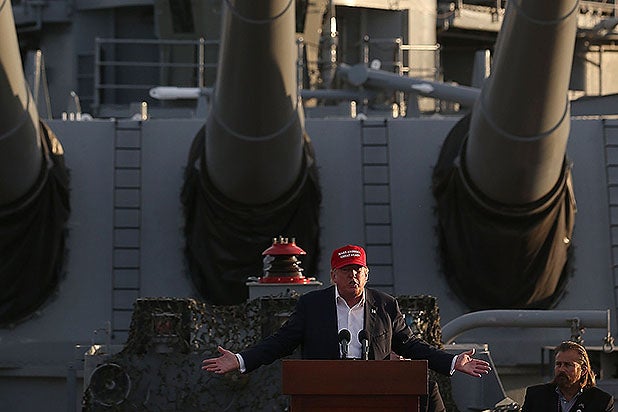 Protester Pam Stenehjem, who is a stay-at-home mom, said she brought her children to the demonstration because she is against everything Trump stands for.

“Donald trump is a misogynistic bully. His rhetoric is just hate spewing. He says nothing of substance and the truth is, since we are not Native Americans, we are all anchor babies,” Stenehjem said.

Trump arrived in San Pedro to deliver his speech just before 6:00 p.m. While the former “Celebrity Apprentice” host teased that he would lay out his views on national security, his speech was short on specifics. Although he did take several jabs at the nation’s undocumented immigrants.”

“You have now found out what illegal immigration is all about and I’m so happy I’m the one who brought it to the fore,” he said. “It is a big problem… there’s tremendous crime, tremendous drugs going to Chicago, going to New York, going to L.A., going all over our country. So the drugs pour in and the money pours out. Not a good deal.” 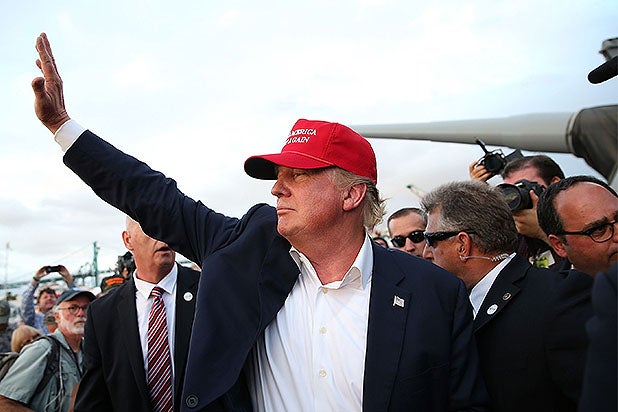 He then blasted the Obama administration for failing to secure the U.S.-Mexico border.

“We get the drugs, they get the money, the drug cartels are going wild. They cannot believe how stupid our government is.”

Trump went on several other tangents during the speech, including the country’s relationship with China and Japan, as well as President Obama’s controversial Iran Nuclear Deal, calling it “one of the dumbest deals and weakest contracts I have ever seen of any kind.”

But as he bashed the country’s current leadership, he was nearly drowned out by the crowd of protesters, which continued to grow.

The louder Trump spoke, the more protesters inched closer to the USS Iowa and the 1,500 to 2,000 people who purchased tickets to hear the presidential candidate speak.

Next up for Trump, the second Republican presidential debate at the Ronald Reagan Library on Wednesday in Simi Valley, California.