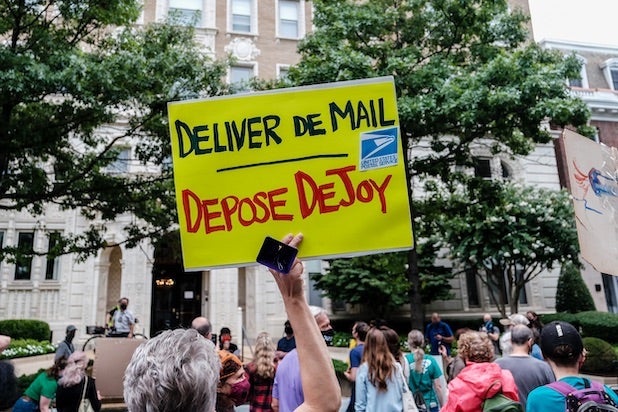 Protesters in Washington, D.C. on Saturday staged a “wake-up call,” as some put it, in front of Postmaster General Louis DeJoy’s house. The protest comes amid concerns from many on the left — as well as many entertainers, including Taylor Swift — that President Trump is maneuvering to make mail-in voting more difficult ahead of the 2020 election.

The protesters, led by activist group Shut Down D.C., marched, chanted and held signs in support of the Postal Service; other signs were critical of the president. “U.S. Mail not for sale,” one sign read, while another said: “Defend Democracy, Defeat Trump.”

When the protesters arrived in front of DeJoy’s home in Northwest D.C., many started rattling noisemakers and blasting air horns. The protest carried on despite a citywide order that says gatherings of 50 people are banned.

Also Read: Trump Orders TikTok Must Be Sold Within 90 Days

“We’re in the middle of a historic pandemic and as many as 40% of Americans plan on casting their ballot by mail. If we can’t rely on those ballots getting to where they need to go, we’ve got a serious problem with democracy,” Shut Down D.C. organizer Patrick Young said.

One protester told WUSA 9, a local CBS affiliate, that he was there because “they’re totally trying to sabotage the election.”

Here’s a look at the scene, thanks to a few reporters.

Protesters are making their way to the Postmaster General’s house for what they call a “wake-up call” pic.twitter.com/swK0CEboPv

A protest today outside the postmaster general Louis DeJoy’s home, via @RamirezReports. pic.twitter.com/y4Yce8Q1CC

The protesters, as well as critics of the president and Dejoy, are worried the Postal Service won’t be able to process an unprecedented amount of mail-in votes on time, due to the COVID-19 pandemic.

Also Read: Trump Speechless After Reporter Asks If He Regrets 'All the Lying' (Video)

Beyond the protest, several celebrities this week raised concerns over voter fraud and funding of the Postal Service. On Saturday, Taylor Swift joined the chorus, saying the president was intentionally hurting USPS to help his reelection campaign.

Trump’s calculated dismantling of USPS proves one thing clearly: He is WELL AWARE that we do not want him as our president. He’s chosen to blatantly cheat and put millions of Americans’ lives at risk in an effort to hold on to power.

Donald Trump’s ineffective leadership gravely worsened the crisis that we are in and he is now taking advantage of it to subvert and destroy our right to vote and vote safely. Request a ballot early. Vote early.

On Friday, actor Bradley Whitford called for DeJoy to be subpoenaed — “and if he doesn’t show up arrest him.”

Subpoena the Postmaster General NOW and if he doesn’t show up arrest him. Fuck your recess. We’re dying here. DO SOMETHING.

“Scrubs” star Zach Braff on Saturday tweeted dismantling the post office was akin to a villain in a James Bond flick.

Dismantling the post office to win is some Roger Moore-Bond villain level devilry.

And actress-turned-activist Alyssa Milano tweeted the president was looking to “steal the election by killing the post office.”

🔥 MAJOR NEWS: Trump is trying to steal the election by killing the Post Office, but we’re fighting back!#DemCast is partnering with @ReallyAmerican1 to #RescueOurVotes!