Marina Ovsyannikova caught the world’s attention earlier this week when she crashed Russian State-TV while holding a sign protesting the war in Ukraine, and now she’s speaking out about why she chose to make the stand.

“I decided to do it spontaneously,” Ovsyannikova, who was an employee of Russia’s Channel One, told CNN’s Christiane Amanpour. “But the decision was brewing for quite a long time. Lately, I have been feeling cognitive dissonance, more and more, between my beliefs and what we say on air. It was a growing sense of dissatisfaction that kept increasing every year, and the war was the point of no return. When it was simply impossible to stay silent and I realized that I would either need to do something or we will reach a point of no return.”

On Monday, Ovsyannikova interrupted a live newscast on Channel One in Russia, shouting “Stop the war!” and holding up a sign that said, “Don’t believe the propaganda. They’re lying to you here.”

The broadcast quickly cut to another video and Ovsyannikova, a former editor at the network, was detained. 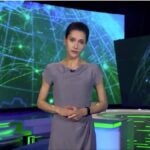 During the interview, Amanpour asked Ovsyannikova how she managed to get access to the anchor desk.

“Let’s say that I was afraid until the last minute that I won’t be able to do it, that it won’t be able to have the effect that I was expecting because the newsroom on Channel One is a huge open plan area,” Ovsyannikova said (her words were translated on CNN). “And I was planning to stand back, but then I realized that I would not be visible and the directors will change the layout very quickly. I’ll be arrested and it will [be] over at once. But eventually, I watched the scene technically and thought how to organize it correclty and right in the last minute I decided that I would be able to overcome the guard who stands in front of the studio and stand behind the host. So, I moved very quickly and I passed by the security and showed my poster.

According to an English translation of a story from Latvia-based Meduza, “The Ostankino District Court fined Channel One employee Marina Ovsyannikova 30,000 rubles (about $280) for walking into the frame with an anti-war poster during a news release. She was found guilty of organizing an uncoordinated public action.”

It’s not clear whether she could face further punishment, although Meduza’s story notes, “Ovsyannikova is also being tested under a new criminal article on ‘public dissemination of knowingly false information’ about the Russian military.” Meduza also reports that the fine is for her anti-war video, not for the on-air disruption.