Have a glass of whatever Mackenzie Murphy is drinking, PTC.

The Parents Television Council is going after Kaitlin Olson comedy “The Mick” again — and this time, trees are the real victim. Oh right, aside from the impressionable children.

Also Read: PTC Urges 'SNL' to Be 'Mindful' of the F-Bombs for 8:30pm West Coast Airings

TheWrap exclusively received the following picture of the complaint stack from the PTC: 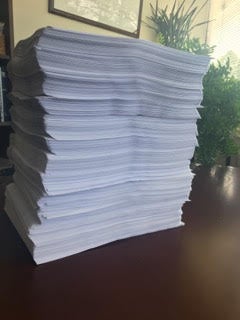 It looks like a lot for PTC Program Director Melissa Henson to lug around. We’re told she used a box.

While that’s a substantial tally of complaints, the PTC sure asked for it — literally.

The group “called for concerned citizens to file complaints over the April 25th episode that aired at 8:30 pm Eastern/7:30 pm Central, and which centered on a teenage girl and her desire to get breast implants,” per a Tuesday media release from the PTC. “The minor tells her guardian that ‘… you’re working the room like you’re mayor of tit town.’ Not only was an indecent word used in a sexual context, but the dialogue was delivered by a minor.”

“Furthermore, the entire episode included graphic sexual dialogue and double-entendres, yet it was rated by Fox as appropriate for viewing by children as young as 14 years old,” it continued.

When reached by TheWrap, Fox had no comment on the PTC’s sky-high stack of gripes. The Parents Television Council itself had plenty more to say however.

“We are urging the FCC to help protect the publicly-owned broadcast airwaves from indecent content such as what was aired on ‘The Mick,'” Henson said. “The t-word has historically been considered off-limits for broadcast TV, as was affirmed in the FCC versus Pacifica Foundation case. Even comedian George Carlin once joked that it was one of the words you could never say on television.”

“The FCC should issue an indecency fine to send a message to Fox Broadcasting and to the broadcast TV industry that indecent content is unacceptable,” she continued. “As long as Fox is licensing and profiting from the use of a public resource – the broadcast airwaves – they must abide by the law.

“Additionally, not only did Fox allow a minor to say the indecent word, Fox enabled the minor to be sexualized by centering the entire episode around her breasts,” Henson went on. “With the Senate hearings over the nominations of Jessica Rosenworcel and Brendan Carr to serve as FCC commissioners taking place on Wednesday, the FCC will finally be in a position to act quickly on adjudicating these complaints. Children must be protected from indecent content.”

“The Mick,” which follows a hard-living aunt (Olson) who is forced to take care of her wealthy sister’s spoiled kids after their parents flee the country to avoid criminal charges, was one of the 2016-17 season’s biggest freshman hits — especially in the sitcom genre.

Season 2 of “The Mick” premieres on Sept. 26 on Fox, whether the PTC likes it or not.