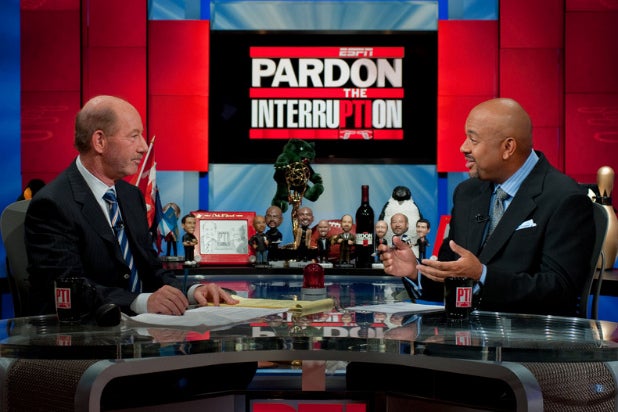 “PTI” hosts Tony Kornheiser and Michael Wilbon have signed new multiyear contract extensions to stay at ESPN. Both will also continue their work on other platforms owned by the powerful Disney cable channel, most notably Wilbon’s NBA commentary.

The popular Kornheiser and Wilbon also do the “PTI” podcast and a daily segment during the opening minutes of the 6 p.m. “SportsCenter.”

This week marks the 15-year anniversary of “Pardon the Interruption,” which is ESPN’s most-watched daily studio program, averaging more than a million viewers per day when including ESPN2’s 6:30 p.m. re-air.

Also Read: Is a Netflix + ESPN Service in the Cards?

“Tony and Mike are the best in the business and ‘PTI’ is the gold standard of daily sports commentary,” Connor Schell, senior vice president and executive producer of ESPN Original Content, said Wednesday in a media release. “That ‘PTI’ remains as insightful and innovative as ever — and as relevant — is a tribute to the genius and hard work of Erik, Matt and their whole team.”

Executive producer Erik Rydholm added: “Tony works harder and is more curious than he was when we started. He’s 15 years older, but acts like he’s 15 years younger. Mike is absolutely tireless, and is constantly forging relationships that give him firsthand perspective that he brings back to the show.”

“We’re thankful and amazed that the great adventure of our professional lives has now reached 15 years,” Wilbon said. “I love every single day of doing ‘PTI’ as much now as when we started the show in 2001, having absolutely zero idea at the time of what we were doing. I wouldn’t trade it for anything in the whole wide world … except for the Cubs winning the World Series.”

“The fact that ESPN would give me yet another extension at my age indicates one of two things: one, they have never actually seen me on television. Two, they feel they are saving money on health insurance because they think I will have all my expenses covered by Medicare,” Kornheiser stated. “Either way I am thrilled to be doing ‘PTI’ with Wilbon and scaring the children.”