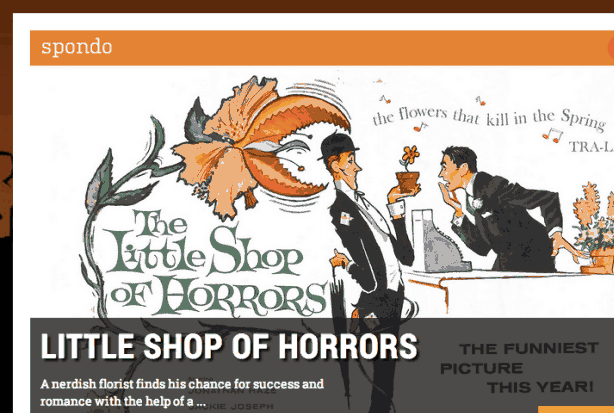 Spondo is letting Facebook users watch feature-length movies and make money on them at the same time.

The Australian digital media company launched the service on Tuesday and has already brought in one prominent Hollywood partner, Cinedigm, to help it build up its user base of on-demand titles. Cinedigm will offer five titles initially, including the psychological thriller “Citadel” and episodes of the mini-series “Dr Horrible’s Sing-A-Long Blog.”

The advertising and pay-per-view revenues will be split between Spondo, the studio and certain individuals who share movie titles on their Facebook page. As a tie-in to Halloween, Spondo is releasing an additional slate of scary movies such as the Roger Corman’s horror films like “The Little Shop of Horrors” and “The Terror.”

Also read: Why Netflix Is Greedy – and Right – About the Movie Business (Video)

Spondo CEO Chris Adams said the company has the rights to 250 films, although they are mostly of the indie or lower-budget genre film variety.

“We want to showcase what we can do, so the more traditional big studios and networks will take notice,” Adams, who advised Facebook and helped build up Participant Media with former eBay president Jeff Skoll, said.

At the same time, Adams argues that Facebook, Twitter and other social media platforms are empowering customers and breaking down Hollywood’s monolithic hold on distribution.

For its part, Cinedigm sees the revenues it gets from Spondo as additive and claims it has no concerns that they will cannibalize deals it has with companies like Netflix and Hulu.

“Our motto is to bring content to people where they want it, when they want it,” Jill Calcaterra, Cinedigm’s chief marketing officer, said. “We not only get a piece of the sales, but we benefit from the exposure. This promotes our titles.”

In total, the company has raised nearly $8 million since it launched in 2007, with $1.7 million of that raised since January 2013 when Adams took over as chief executive officer. It has 10 employees over its offices in Australia and Los Angeles.