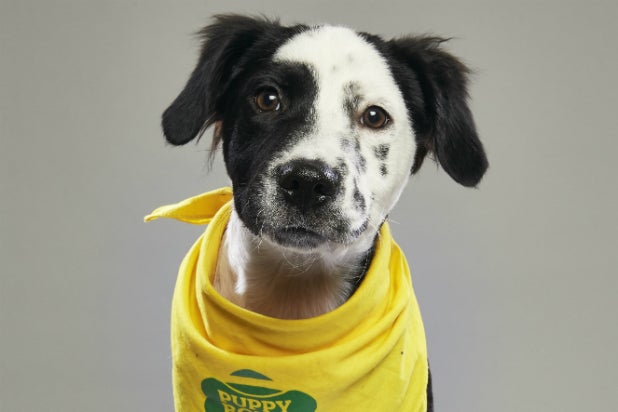 (Editor’s note: We republished this post today in celebration of National Puppy Day. This story original ran on February 4, 2018.)

Attending the “Puppy Bowl” taping sounds a lot like this, on repeat: “AWWW!”

TheWrap heard plenty of fawning on Oct. 17, 2017 at AMV/Unitel studios in New York City, where the annual event is filmed months in advance of its February air date. (Sorry to ruin that Super Bowl Sunday TV magic for you, but it’s not quite live.)

We’ve fetched seven behind-the-scenes treats for our dog-fancying readers. Wanna go for a walk with us through the event space? Keep scrolling, good boys and girls.

All Set With a New Set
This Puppy Bowl had a new bone-shaped stage (at GEICO Stadium), 3-D fans, and real tunnels for the shyest pooches to cower in when the game got particularly ruff (LOL).

The endzone pylons were not to scale — though that’s because they housed some of the dozen cameras used to capture the action.

Hurricane Relieved
“Puppy Bowl XIV” features baby dogs rescued from areas that were devastated by natural disasters in 2017 — including Houston, Puerto Rico and Florida. So yeah, the adoption-pushing fixture was for an even better cause this year.

The Most Special Pups
This big game featured six special needs puppies, and TheWrap can attest that they were each handled and filmed with great care. A wag of the tail to producers and volunteers.

Pass-Blocking
There were a half-dozen human blockers positioned at the front of the stage (roughly two-and-a-half feet tall), but they weren’t always able to keep the pups on the field of play. Yes, doggies fell during the heat of battle. No, they weren’t hurt.

…And Don’t Call Me Shirley
Shirley the Sloth, who serves as “Puppy Bowl” referee Dan Schachner assistant ref on the field this year has a secret: she’s no Shirley.

The sloth’s given name is actually “Serenity” — but to keep the pup-arazzi from “tailing” her between gigs she uses a stage name, Shirley.

A Bear Among Pups
Virginia-native Bear (pictured above) was dominant on the gridiron, racking up touchdowns and carrying Team Fluff to certain victory. (OK, we can’t actually be certain because this entire thing is totally arbitrary and purely for the cuteness.)

Throw a hundy down on Bear for MVP (Most Valuable Puppy, obviously) — you know, if you’re into dog-gambling.

Less Divisive Than Real Football
Jokgu the piano-playing chicken from Season 12 of “America’s Got Talent” will start the festivities by pecking out “The Star-Spangled Banner” on the keyboard, as an adorable blended bunch of baby barnyard cheerleaders — including ducklings, piglets and baby bunnies — help excite fans on the sidelines.

As far as we could tell, no pups took a knee — err, laid down — during the national anthem. Stay together, America.