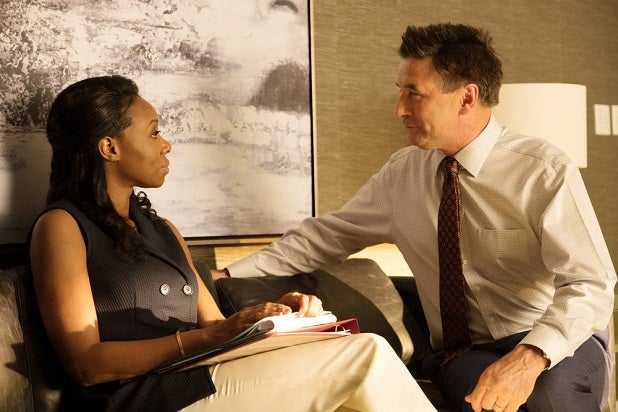 (Note: This post contains spoilers for the Oct. 9 episode of “The Purge.”)

The concept behind “The Purge,” a night each year when all crime, including murder, is legal, is pretty ridiculous when you apply any logic to it. Of course, the point isn’t that the Purge makes sense — it’s a state-sponsored terror campaign designed to keep the lower classes in line.

The four films have used that theme mainly to examine American racism and classism with blantant candidness. And for much of its first season, USA’s TV addition to the series, “The Purge,” has been content to do the same.

But in its latest episode, “The Forgotten,” the show diverged from that with a chilling look at how an event like the Purge would disproportionately affect women. A year into the #MeToo era, and following the appointment of Brett Kavanaugh to the Supreme Court amid accusations of sexual assault, which he has consistently denied, “The Purge” franchise suddenly feels as relevant as it’s ever been.

The TV series has mentioned before that violence against women is a huge part of each annual Purge night. As we saw in the fourth episode of the season, “The Urge to Purge,” the problem is so bad in Los Angeles that a group of vigilante women go out each Purge night with the express purpose of saving other women who are in danger. With the lack of any sort of institutional protections, they take matters into their own hands, physically branding the faces of the men who hurt women during the Purge to mark them for the rest of the year.

Things escalate even further in “The Forgotten.” After spending two episodes trying to reach her boss to save him from the hit woman she hired, Jane (Amanda Warren) finally gets to him and explains the situation. David (Billy Baldwin), the boss Jane believes has passed her over for promotion, possibly because she rejected his passes at her, seems understanding at first — but then reveals the he’s running a secret Purge sexual assault party, and he’s going to force Jane to be a part of it.

David explains the nature of his “party”: the women are forced to participate, but there are some rules. There’s no nudity or penetration, and everything happens over clothes. There’s no murder, because “we are not animals,” he says. He notes that another woman who was promoted over Jane has excelled because she was willing to go along with David’s desires, and in fact, she’s the only woman at the party who isn’t tied up.

As with everything in “The Purge,” the scene is a take on viewpoints and people that really exist in America today, but this is easily the most pointed the show has been since it started. David could easily be a stand-in for any of the powerful men accused of sexual harassment and assault over the last year.

David also brings up how “PC” the nation has become, creating a situation in which, if he tells a woman, “I can’t stop thinking about you,” he could lose his company. Those are of course things men have actually said about the #MeToo movement in real life.

Also Read: Everything We've Learned About the Purge from the Movies

Of course, for women, the discussion is extremely different. As “The Handmaid’s Tale” paraphrased the author of the book on which it’s based, Margaret Atwood, “Men are afraid women will laugh at them. Women are afraid men will kill them.”

“The Purge” at its best feels like an awful, too-close version of our own world. Its characters get a once-a-year outlet to drop their social niceties — what David would call “PC” but so often is just the idea of treating other people with respect — and act how they really believe. The night of the Purge gives people like David an opportunity to make their subtext into text.

Also Read: 'The Purge': What is the NFFA, or New Founding Fathers of America?

That’s the real horror “The Purge.” It imagines a world that’s the same as ours, except that one night a year, the worst of us get to drop their masks, say what they mean, and do what they fantasize about. The scary part is that we can imagine knowing the people in the show. In the current moment, in which at least some powerful abusers are finally being held accountable, the look “The Purge” takes at some of those men is all the more frightening because it feels all too real.