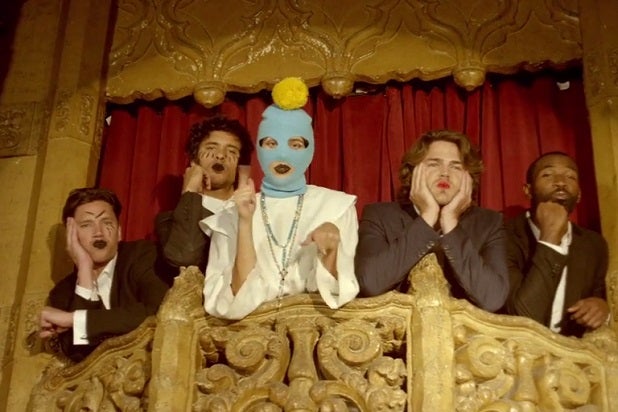 Pussy Riot are back — and they’re “Straight Outta Vagina.”

The musicians/agitators — who became a cause celebre in 2012 after receiving a two-year sentence for protesting Russian president Vladimir Putin in a church — dropped their new video, “Straight Outta Vagina,” on Tuesday, and it’s a real toe-tapper. As well as a head-scratcher.

“Does your vagina have a brand? Let your vagina start a band,” the group declares on the track. “If your vagina lands in prison/Then the world is gonna listen.”

Then there’s the anthemic chorus, “Don’t play stupid, don’t play dumb/Vagina’s where you’re really from.” Hard to argue with that logic.

The video itself is, predictably, a spectacle, featuring men in business suits and high heels, and a chorus line of women stepping up to the urinals. And, for some reason, inflatable ducks. Lots of inflatable ducks.

While the song does not appear to explicitly comment on presidential aspirant Donald Trump, the description of the video does take a barely veiled swipe at the GOP nominee.

“[T]he owner of vaginas is not some narcissistic stupid orange ape who’d claim that he could easily grab women by their pussies,” the description reads. “The owner of vagina is a woman. Who wears her vag as a badge of honor.”

Yep — that would seem to be a reference to Trump’s now-infamous “Grab ‘em by the pussy” comment, which was recently leaked from a 2005 conversation with then-“Access Hollywood” personality Billy Bush.

Dig into the gyno-centric glory of “Straight Outta Vagina” by watching Pussy Riot’s new video below.