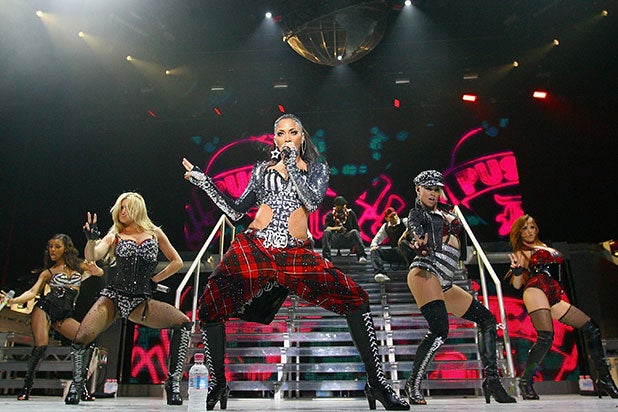 Pussycat Dolls Inc. and Pussycat Dolls founder Robin Antin have slapped the Daily Mail Corporation with a defamation lawsuit, alleging that the girl group/dance ensemble was falsely smeared by reports that it served as a “prostitution ring,” and that Antin got members of the group “hooked on drugs.”

In the suit, filed in New York Supreme Court, Antin and The Pussycat Dolls maintain that accusations by Kaya Jones, who purported to be a former member of the group, were “obviously false,” and that Daily Mail published Jones’ claims “with a reckless regard for the truth.”

“This defamation action arises out of the intentional, reckless and malicious publication by the Daily Mail Corporation, acting as an agent or department of DMGT and DMG Media, of false and defamatory statements made by a disgruntled, unreliable and biased person looking for her fifteen minutes of fame, Kaya Jones (‘Jones’ or ‘Ms. Jones’), when the Defendants knew through their direct prior dealings with Plaintiffs, or should have known, with even the most basic check, that Ms. Jones was .unreliable and her story obviously false,” the suit reads.

“Instead, for pure sensationalism, and advertising money, and to grab salacious headlines to sell their product, and without caring what it meant for Plaintiffs, their business, or their reputation, the Defendants published and commented on these defamatory statements with a reckless disregard for the truth,” the suit continues. “These statements included statements that: The Pussycat Dolls was not a legitimate recording group but was instead (1) a ‘prostitution ring,’ (2) that Ms. Antin and The Pussycat Dolls got the members all ‘hooked on drugs,’ (3) that all members were abused in this way, (4) that Ms. Antin ‘mentally and verbally abused’ the members of the group ‘every second of the day,’ (5) that Ms. Antin was the supposed madam of this prostitution ring (referred to by Ms. Jones as the ‘den mother from hell’), and (6) that Ms. Antin was somehow responsible for the death of performer Simone Battle. These statements are false, and the Defendants knew or should have known it.”

The lawsuit, which takes issue with reports it says were published in October 15 and October 17 of last year, says Jones was never an official member of The Pussycat Dolls, but rather served as a backup vocalist who performed on a couple of songs released in 2004.

The suit says that the Mail was aware Jones wasn’t a member of the Pussycat Dolls based on its previous coverage of the group.

“Indeed, the Defendants have interviewed Ms. Antin, even once at her home, and members of The Pussycat Dolls, including international star Nicole Scherzinger. Defendants have even reported numerous times over the years on the huge success of the group, and therefore is well aware that The Pussycat Dolls were not a front for a prostitution ring, as they reported, the members were never forced to take illegal substances, and were never sexually or mentally abused,” the suit reads. “Defendants knew, based upon their interactions with the members of the group, that nobody had ever so claimed or even insinuated that these events took place.”

TheWrap has reached out to a Daily Mail representative for comment on the suit.

According to the suit, the reports have had dire consequences for the reputations of Antin and the group.

“As a result of the actions of the Defendants, Ms. Antin went virtually overnight from a well-respected business woman, to literally being viewed world-wide as the head of an alleged prostitution ring, and someone who fed performers illegal drugs, abused
them in untold ways, condoned sexual assault of the members of The Pussycat Dolls, and was supposedly responsible for the death of a performer,” the suit reads.

“Likewise, The Pussycat Dolls, an entertainment group built on the virtues of being empowered women, is now viewed world-wide as a group of abused and immoral women, whose operator (Ms. Antin) supposedly perpetrated, required, and condoned these horrific acts,” the suit continues. “All of this was false, and the Defendants knew it, or should have known it, for the many reasons discussed above and below.”