President-elect Donald Trump shared a letter from Russian President Vladimir Putin on Friday that not only offered his “warmest Christmas and New Year greetings,” but also a political message of restoring “the framework of bilateral cooperation.”

“A very nice letter from Vladimir Putin; his thoughts are so correct,” Trump said in a statement. “I hope both sides are able to live up to these thoughts, and we do not have to travel an alternate path.”

In the unofficial translation of the Kremlin’s Christmas greeting dated Dec. 15, Putin wrote that “serious global and regional challenges, which our countries have had to face in recent years, show that relations between Russia and the US remain an important factor in ensuring stability and security of the modern world.”

Also Read: Mark Hamill Warns Rockettes to 'Remain Vigilant' at Trump Inauguration: 'So Much to Grab'

Putin went on to write of his hope that after Trump assumes the position of the POTUS that “we will be able — by acting in a constructive and pragmatic manner — to take real steps to restore the framework of bilateral cooperation in different areas as well as bring our level of collaboration on the international scene to a qualitatively new level.” 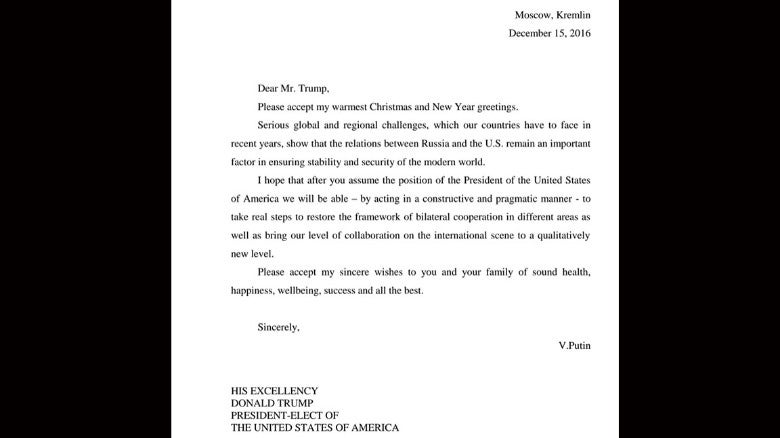 At Putin’s year-end press conference Thursday, the Russian president said: “We need to discuss ways to normalize our relations. During his election campaign, Trump said it would be proper to normalize and it can’t be worse, and I agree with him.”

All of this comes weeks after the FBI and CIA came to the agreement that the Russian government used hacking to disrupt the U.S. Presidential election in part to aid Trump.

However, the agencies do not believe aiding Trump was Russia’s only goal. They also believe Russia’s intent was to undermine faith in the U.S. electoral system. Trump has consistently denied reports that Russia played any role in his stunning victory over Hillary Clinton in November.