Jump for joy, “Quantum Leap” fans: The long-rumored reboot of the beloved sci-fi series, which ran on NBC from 1989-1993, is finally out of the development stage and into the pilot creation phase.

On Thursday, NBC announced it had ordered a one-hour pilot about a new team dusting off the accelerator and – we hope – searching for the series original time-hopping star, Dr. Sam Beckett (Scott Bakula), who vanished in the series finale.

NBC has also ordered a one-hour pilot for the drama “Found,” from “You” creator Greg Berlanti and Nkechi Okoro Carrol, who’s also behind the “Life Goes On” reboot.

The logline for the new “Quantum Leap” is as follows: “It’s been 30 years since Dr. Sam Beckett stepped into the Quantum Leap accelerator and vanished. Now a new team has been assembled to restart the project in the hopes of understanding the mysteries behind the machine and the man who created it.”

No cast has yet been announced, but if Bakula isn’t back in some form, fans will likely riot. Co-star Dean Stockwell, who played Admiral Al Calavicci on the cult series, sadly passed away on November 7, 2021.

Just two months before Stockwell’s death, Bakula told Bob Saget on his podcast that the delay in the reboot was mostly due to copyright issues: “There are very significant conversations about it right now going on… The rights were a mess for years. I don’t know if they’re even sorted out now. That’s always been the biggest complication.”

He shared that he and series creator Donald P. Bellisario, now 86, have talked often about a potential comeback, but that Bellisario would say, “I can’t write it without thinking of you and Dean, to which Bakula would reply, “Just think about me and Dean and write your show. Get it out there… I am sure it will be great.” 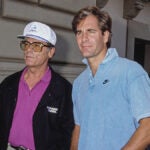 The pilot will be produced by series creator Bellisario’s Belisarius Productions, Martin Gero via Quinn’s House Productions, Bryan Wynbrandt and Steven Lilien at I Have an Idea! Entertainment, Deborah Pratt and by Universal Television.

“Found,” meanwhile, focuses on missing people and the logline is as follows: “In any given year, more than 600,000 people are reported missing in the U.S. More than half that number are people of color that the country seems to forget about. A public relations specialist — who was once herself one of those forgotten ones — and her crisis management team now make sure there is always someone looking out for the forgotten missing people. But unbeknownst to anyone, this everyday hero is hiding a chilling secret of her own.”