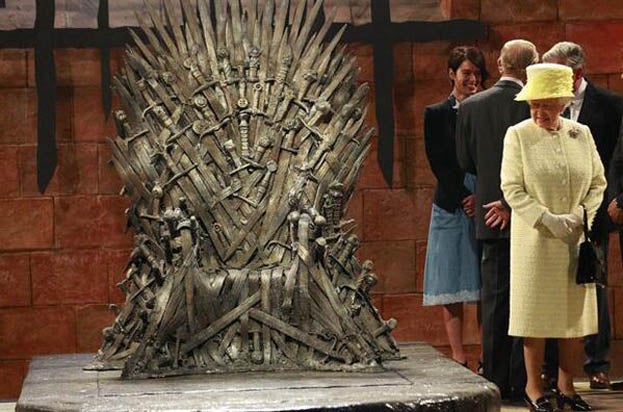 The Queen Mother herself recently visited Westeros, however she made no attempt to take the infamous Iron Throne.

During a visit to Northern Ireland, Queen Elizabeth II dropped by the set of “Game of Thrones,” where she was given the royal treatment by the cast and crew of the HBO epic. As Mediaite noted, cast members Lena Headey and Kit Harrington greeted her as she viewed the props and costumes that make up the world of “Game of Thrones”

She paid The Iron Throne more than a passing glance though she never took the seat of power. She’s probably plotting to take it by force rather than diplomacy.

Queen Elizabeth took a pass on taking a seat on the Iron Throne during a #GoT set tour in Belfast pic.twitter.com/FdIjpa8IjS

ITN captured the encounter in the footage below: