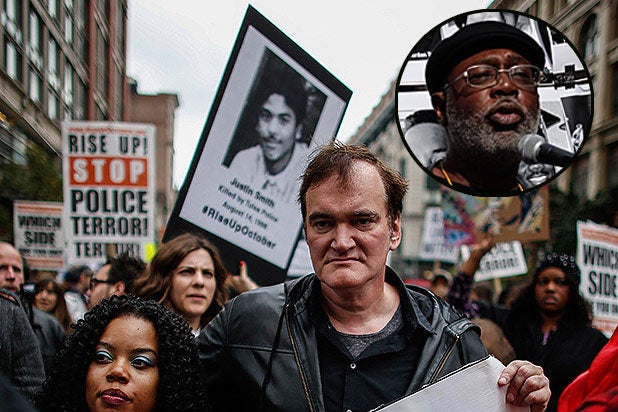 As Quentin Tarantino stands his ground in the controversy over his comments about police brutality, the organizer of the rally where Tarantino spoke out is coming to the director’s defense.

“[It] really is a Mafia-style protection racket thing, only the payoff is toeing the political line, not cash,” Carl Dix told TheWrap Thursday as he lashed out against the police groups threatening to boycott Tarantino’s upcoming western “The Hateful Eight.”

In the wake of numerous calls by police groups to boycott his work, the Oscar winner has dug in his heels, defending his stance in an interview with the Los Angeles Times and telling MSNBC’s Chris Hayes on Wednesday, “They want to slander me and imply I’m saying things I didn’t say.”

Dix, lead organizer of the Rise Up October movement, explained why the group reached out to Tarantino and he revealed that the “Django Unchained” director was one of the few celebrities to respond.

Below is TheWrap’s interview with Dix.

TheWrap: How did come to be involved with the protest?
Carl Dix: We approached him. What we did is we tried to reach out to everybody that we could from many different sections of society. We adopted a plan to bring 100 families of people murdered by police to New York City to participate in the rally. We reached out to college students, we reached out to the clergy, to different professional groupings of people. And we reached out to prominent people who we felt there was some reason to think that they might be interested in participating, based upon how they had responded to different developments that had been going on. Not that many of the prominent people responded, but Quentin was one who did.

What in particular made you think he was a good fit?
He had done an interview where he talked about the process he goes through in making movies, and how over the past few years the developments that had been going on in society and the research he had been doing around movies had brought together that there was a problem with white supremacy in society, I think is how he put it. And we felt, “OK, let’s try to reach him” as well as all the other people we were trying to reach. Few responded of those who were well-known people, and he was one of them.

Were you surprised by the calls to boycott “The Hateful Eight” by police groups?
Well, we did expect that the authority figures would not like it. We did not expect that would become the focus of it.

What are your thoughts on the calls for boycotting the movie?
I think we have to actually say what they have said, because in addition to calls for boycotts, several of the police organizations have said that Tarantino should be denied permits to film, that police should not do things like reroute traffic or provide protection for his filming. That is beyond the question of not buying tickets to his film. That is saying, “Let’s use our institutional role to punish someone for a political statement that they made.” And it really is a Mafia-style protection racket thing, only the payoff is toeing the political line, not cash. In other words, don’t criticize police brutality, or we can do this to you. So they’re actually talking about using the institutional power of the police department to punish Quentin Tarantino. It’s not only a message to him, it’s a message to other people: “If you do this, we could to the same to you,” in order to try to chill other prominent voices of conscience into passivity on this question.

When Tarantino was talking to you about appearing, was he concerned about any kind of backlash?
I talked with him before things got started. The officer had been killed a couple days before our protest, and we said to him, “They’re saying that everyone should support the police, and it wouldn’t surprise us if they turned that against our protest.” And he said at the time that he wasn’t concerned, because he was only going to speak to what he knows to be true. And he knows [it] to be true that there are some police who are getting away with murder and the system is not holding them accountable, and that that needed to stop. Which is eventually what he said.

Tarantino has been criticized about how he portrays race in his films, particularly with the use of the N-word. Was that a concern for you when you approached him to participate in the rally?
Once he agreed to participate, we had some discussion with some people. I have written about one of his movies, “Django Unchained,” and I said I don’t like his use of the N-word in his movies. But on balance, when you look at this movie, it has a very accurate portrayal of slavery, even though some of the violence is over the top. And it is a movie… But the chief question isn’t, “Is everything in it realistic and lifelike?” He actually got some of the obvious but also some of the subtle violence of the enslavement of African-Americans, and brought that out very well. And I thought that people needed to look at that and learn from that, in terms of the way that white supremacy was in action during slavery. But also you could learn some things about its continued existence today.

The point wasn’t that I or we loved all of his work and that’s why we went to him. The point was that we weren’t going to draw the dividing line over, “Well, we’ll unite with artists if we liked their work, but we won’t if we don’t.” The dividing line was, who wants to join us in acting to stop police terror and challenging people over which side they’re going to be on? And that was a dividing line that Quentin wanted to be on the same side of with us.