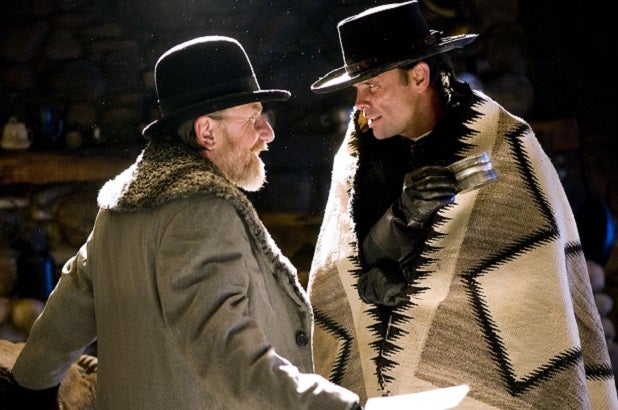 For Quentin Tarantino, Tuesday’s word that his new movie “The Hateful Eight” won’t be playing in three of the U.K.’s top theater chains when it opens there on Friday must seem like deja vu all over again.

The writer-director’s R-rated frontier thriller won’t screen at Cineworld, Picturehouse and Curzon theaters, after the chains’ executives failed to reach an agreement with the film’s U.K. distributor Entertainment Film. It’s a blow, because Cineworld, which also owns Picturehouse, represents around 800 screens alone.

Tarantino last month accused Disney of “extortion” after Pacific Theaters’ Arclight Hollywood chose to play “Star Wars: The Force Awakens” in its famed Cinerama Dome rather than “The Hateful Eight” over the holidays.

“We love a Quentin Tarantino movie, but it is with great regret that we will not be showing The Hateful Eight from Friday 8 January,” Curzon Cinemas tweeted Tuesday. “On this occasion, the distributor has chosen to screen the film only in 70mm in the West End and in selected venues nationwide.”

Tarantino has championed 70mm and launched “The Hateful Eight” in the U.S. with an exclusive run in 100 theaters equipped with the non-digital projection systems. The difficulties involved with screening the 70mm Tarantino film, which has been released in a two-and-a-half-hour multiplex cut and a three-hour “Roadshow” version, which includes both a musical overture and 12-minute intermission, appear to be at the center of the dispute.

In a statement Tuesday, Entertainment said the decision to not run “The Hateful Eight” was Cineworld’s and that it would try to find other theaters to replace those lost.

“Cineworld had made us aware that they were very unhappy that ‘The Hateful Eight’ had been booked into the Odeon Leicester Square for an exclusive 70mm Ultra Panavision presentation, and specifically that they would therefore not be able to play the film at their Picturehouse Central venue,” it said.

“Due to the special facilities required for the unique 70mm Ultra Panavision presentation we needed the largest theatre and screen possible in the West End and the Odeon Leicester Square was the natural choice. The technical elements and costs involved with this special presentation meant that this would need to be the exclusive West End venue. The Odeon Leicester Square seats 1,680 and Picturehouse Central only seats 344 so clearly this was not a viable alternative.”

Just like in the U.S., “The Hateful Eight” will debut in the massive shadow of “Star Wars: The Force Awakens.” The U.K. trails only the U.S. in terms of generating grosses for Disney’s blockbuster, which has taken in $147 million there.

“The Hateful Eight,” which was produced by long-time Tarantino associate Richard Gladstein’s FilmColony for $44 million, debuted on the low end of expectations in the U.S. last weekend at $15.8 million. Its domestic total is $30.6 million after 11 days in release.

In addition to the theater disputes, “The Hateful Eight” was also targeted with a boycott by police unions after Tarantino made what they felt were anti-law-enforcement comments at a rally against police brutality.