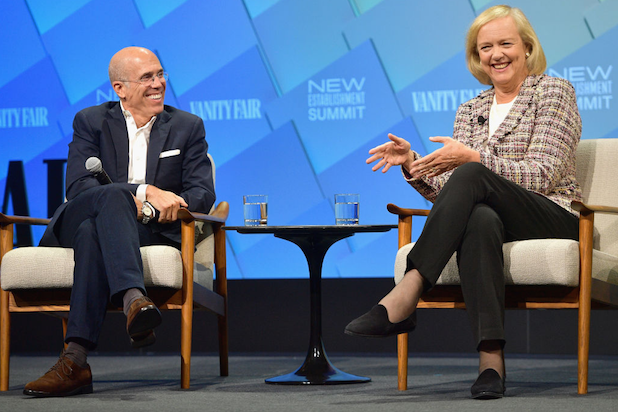 After spending much of the last year signing some of Hollywood’s top creators, Jeffrey Katzenberg and Meg Whitman gave the crowd at CES in Las Vegas a first look at Quibi, their upcoming mobile-only streaming service, on Wednesday morning.

Quibi’s public unveiling — three months ahead of its April 6 launch — emphasized the app’s “Turnstyle” technology, allowing viewers to seamlessly transition from horizontal to vertical fullscreen video. This “engineering breakthrough,” Whitman said, has helped open up “an entirely new creative canvas for the best storytellers in Hollywood to delight audiences in ways we never thought possible. It will also help separate Quibi from other apps that cannot offer fullscreen video in the same way.

Backed by major investors like Disney and WarnerMedia, Quibi will release 175 new shows in its first year, according to Katzenberg.

Quibi, short for “quick bites,” is looking to differentiate itself from other streaming services by having all of its episodes run no longer than 10 minutes. The app will include binge-able shows, as well as movies — dubbed “Lighthouses” by Quibi — that’ll be broken up into 10-minutes-or-less episodes and released daily.

A who’s who of stars, producers and directors have already signed on to make shows for Quibi, including Steven Spielberg, Jennifer Lopez, Bill Murray, Ridley Scott, and Kendall and Kris Jenner. The plan, Katzenberg said, is to offer three hours of new content each day on the app and hopefully give viewers something quick and entertaining to watch while on-the-move.

Whitman, Quibi’s chief executive, said we’re going through a new “revolution in entertainment,” where mobile phones play a key role in reaching billions of people; Quibi’s goal, she said, has been to “build a new technology platform that could enable creators to tell stories in new ways for our mobile phones.”

During Wednesday’s keynote, Whitman pointed to Spielberg’s horror series, “After Dark,” as a clear example of making shows that leverage mobile technology. Spielberg, according to Whitman, came to Quibi and said he wanted his show to only be available to viewers at night, to heighten the spooky experience. Quibi’s engineers, she said, we’re able to make this happen by determining when the sun rises and sets for each viewer based on their location.

Quibi is betting viewers will pay to watch its collection of big name talent, with its ad-supported subscription costing $4.99 when the service launches, while its ad-free tier will cost $7.99 per month.

Katzenberg and Whitman gave a brief review of some of the shows and movies that’ll hit Quibi later this year, including “#FreeRayshawn,” a story of a young black Iraq War veteran who is running from the cops after they set him up on bogus drug charges. The movie will star Laurence Fishburne and is directed by Antoine Fuqua. Whitman then asked the crowd at the Aria to sign up for “Quibi Insiders” at Quibi.com, where the company will continue to share updates on new technology and shows as it gets closer to making its debut.

Check back on TheWrap later on Wednesday for an extended interview with Katzenberg and Whitman.

And who could forget Alexei and his Slurpee from “Stranger Things?”

As 2019 comes to a close, let us harken back and remember some of the greatest gifts we've been given this year: memes. There was Alexei and his beloved Slurpee from Season 3 of "Stranger Things" (may he rest in peace), the "When the 'Succession' Theme Song Hits" meme of Kermit the Frog dancing, Marie Kondo instructing us to trash absolutely anything that "doesn't spark joy" and so many more. Let's take a pause to remember the TV memes that got us through the year 2019.