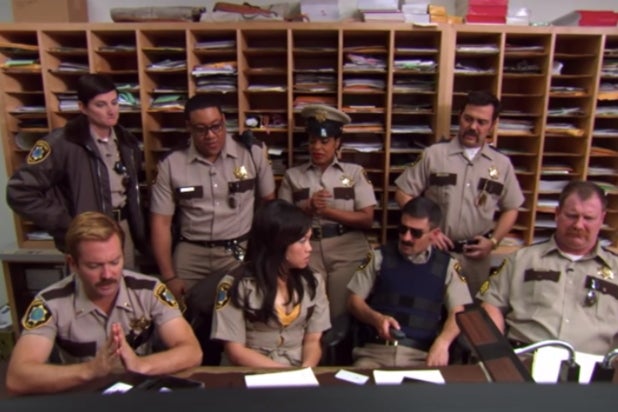 Quibi and Comedy Central are getting the “Reno 911” gang back together again, with the upcoming mobile-only streaming service announcing Thursday the show’s full cast would be returning for its seventh season.

A decade after “Reno 911” went off the air, Quibi listed the show’s former stars that would be returning, including: Niecy Nash as Deputy Raineesha Williams; Wendi McLendon-Covey as Deputy Clementine Johnson and Cedric Yarborough as Deputy S. Jones. They’ll join co-creators Robert Ben Garant, Kerri Kenney-Silver and Thomas Lennon, who Quibi already announced in December would be returning to write and star in the new season.

Here’s a look at the additional cast members that will come back to “Reno 911,” per Quibi:

Danny DeVito is also attached to executive produce, along with Peter Principato of Artists First, Michael Shamberg and Stacey Sher of Jersey Television. “Reno 911!” ran for six seasons of Comedy Central from 2003 to 2009, and followed the shenanigans of the Reno Sheriff’s Department.

“RENO 911! holds a special place in our hearts, and it will be a delight to get the original cast back together for ‘re-boot goofin.’ Hopefully Nick Swardson can still roller skate,” Lennon said in December. “Quibi’s short format seems custom made for our show.”

Quibi is set to launch on April 6. It’ll cost $4.99 per month for ad-supported streaming, and $7.99 for ad-free service. The company, led by CEO Meg Whitman and founder Jeffrey Katzenberg, is looking to separate itself from a growing list of streaming services by making episodes that are a maximum of 10 minutes long (Quibi is short for “quick bites.”). In a recent interview with TheWrap, Katzenberg said Quibi isn’t worried about competition from services like Disney+ when it comes to winning over subscribers.