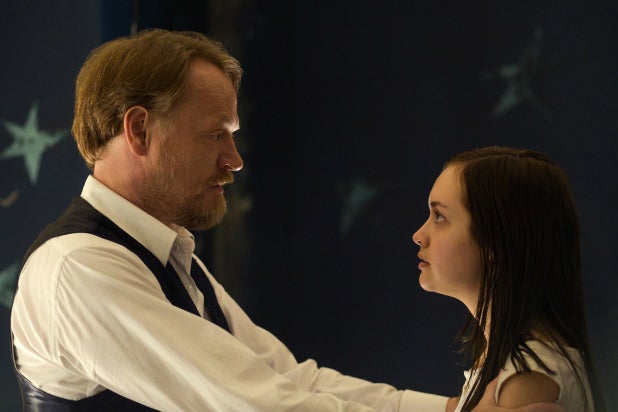 The history of science is so rife with preposterous experiments and stark exploitations that it needn’t be cheapened by one more junky mad-scientist horror flick that aims only to scare audiences into jumping out of their seats. And yet director John Pogue‘s “The Quiet Ones” exists, and it doesn’t even aspire to frighten; it’s satisfied to screech and shriek.

Clever and stylish uses of 1970s period detail and a cast too good for this thin, thought-free material are the only features that distinguish this otherwise generically nonsensical tale of demon possession.

Star Jared Harris (“Mad Men”) slums it as Professor Coupland, a psychology instructor at Oxford. Known as “Joseph” to his favorite female students, the charmingly pompous lecturer recruits a pair of thrilled brown-nosers (Erin Richards and Rory Fleck-Byrne) and townie cameraman Brian (Sam Claflin, the “Hunger Games” franchise) to take part in a dubious experiment designed to prove the existence of supernatural abilities.

When university higher-ups discover the hokum they’ve been underwriting, they pull Joseph’s funding, forcing him and his small team to transfer their research subject, a suicidal girl-woman named Jane (Olivia Cooke), from campus to a tastefully crumbling manor outside of town.

What’s the best way to document paranormal activity? Joseph has no idea, and judging by the meandering script by Pogue, Craig Rosenberg, and Oren Moverman, neither do the screenwriters. Jane claims no powers of her own, blaming the sudden power outages and spontaneous cuts on her body as the doings of a spirit named Evie.

The professor and his assistants thus attempt to prod Jane/Evie into performing acts of telekinesis through drugs, séances, hypnotism sessions and patronizing invitations (“We just want to be your friend”), all of which are just opportunities for Pogue to turn the volume way up on some clanks and clangs while whirling his (or, technically, Brian’s) camera around at nothing in particular.

Employed several times too often, that scare tactic is more startling than menacing. Much more creepy is the perpetually buzzing mid-century analog equipment that dot the abandoned mansion like a plague of locusts upon a field. The unassuming brown boxes with endless sequences of numbered grooves take on an otherworldly tinge, partly because their ugly ancientness render them ghostly and partly because it’s never explained what those devices measure, thus leaving something to our imaginations.

As Brian begins to realize that Joseph’s experiments amount to a series of tortures for Jane, he devises a way to free her from the professor’s grasp while convincing the older man that Evie isn’t just a figment but something much more nefarious. Brian’s fondness for Jane pushes him into the smartly spun web of sexual jealousies that traps the characters, a compelling tangle that also includes student-researcher Krissi (Richards), a blond flirt who looks like she stepped out of a 1974 issue of French Vogue. Predictably enough, her sexuality marks her as the first to go, and it’s a huge loss when she does, for the character’s Bardot-esque wardrobe is one of this film’s few highlights.

Claflin’s wet eyes and Harris’ touching failures to hold on to his dignity adorn this project with much more seriousness than it deserves. Harris is particularly impressive as a genteel predator who regards his life with nihilistic despair while dreaming of the day he’ll win the Nobel prize.

Despite its outstanding performances, “The Quiet Ones” remains the very thing its protagonist scoffs at: a pointless story about “evil begetting evil for the sake of evil.” Evil can be defeated, but emptiness always prevails.