R. Kelly’s YouTube channels have been removed from the platform after the R&B singer was found guilty of sex trafficking and racketeering. His songs and albums will remain on YouTube Music.

The Google-owned platform has permanently suspended the RKellyVevo and RKellyTV channels, which hosted official uploads of Kelly’s songs and videos.

A YouTube spokesperson on Wednesday told TheWrap, “We can confirm that we have terminated two channels linked to R. Kelly in accordance with our creator responsibility guidelines.” 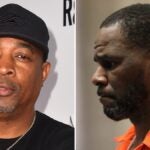 Under those guidelines, creators must “remain responsible both on and off the platform.” YouTube lists “inappropriate” behavior off platform to include, “Intending to cause malicious harm to others” and “Participating in abuse or violence, demonstrating cruelty, or participating in fraudulent/deceptive behavior leading to real world harm.”

R. Kelly will no longer be allowed to use, create or own any other YouTube channels, the spokesperson added. However, user-generated videos containing Kelly’s music can still be uploaded and are still live on the platform.

Though his videos have been yanked from YouTube, Kelly’s music remains on the platform’s audio streaming service, YouTube Music. Other top streaming services have also withheld from banishing Kelly — his songs and albums are still available on Spotify, Apple Music, Tidal and Amazon Music. Following news of Kelly’s permanent YouTube ban, the MuteRKelly campaign pointedly tweeted, “Waiting on you @youtubemusic, and you too @Spotify @AppleMusic @AmazonMusic.”

The 54-year-old singer was convicted by a federal jury in September in his racketeering and sex trafficking trial. He faces 10 years to life behind bars and will be sentenced in May 2022.